By Rodriguez Davis
210
0
Share:
In a crowded subcompact crossover segment, the 2019 Hyundai Kona stands out. Its exterior design is perhaps polarizing, but it’s guaranteed to get more attention than its more egg-shaped competitors. It offers two engines, one of which is average, but the other is a turbocharged unit that makes the Kona significantly quicker than the slow norm for this class. Both engines can be had with all-wheel drive, and every Kona is surprisingly fun to drive. Add in a user-friendly, albeit small interior, and the Kona is one of the best subcompact crossover choices.

Since 2019 is only the Kona’s second model year, there haven’t been many changes. The most significant are more safety features included as standard equipment: automatic emergency braking, lane-keeping assist and a driver inattention monitor. The Ultimate trim level’s automatic emergency braking is also now enhanced with pedestrian detection. There are also some detail changes including two USB ports in the front, which replace a 12-volt outlet. The upgraded Infinity audio system is now available on Ultimate, Limited and the SEL trim with the Tech package. A new color called Sunset Orange is available. And finally, a limited-production Iron Man edition Kona was released with paint, decals, lighting and heads-up display all customized to reflect the Marvel superhero. It will not make you look like Robert Downey Jr.

Most interior plastics are unremarkable, even for this segment. Most Kona interiors are also a bit on the drab side, but there are at least some varying textures that help break up the monotony. So too can the standard houndstooth upholstery (turbo models get plain black leather) and the lime green trim and seat piping offered on upper trim levels.

The low dash offers good visibility, the steering wheel sufficiently adjusts, and upper trims benefit from a power driver seat that provides more adjustability than most in the segment. The driving position is also higher than a car, but we wouldn’t say you get the “commanding view” of the road like you’d get in a bigger crossover.

One of the Kona’s major perks is the easy-to-use infotainment system. As in other Hyundai products, it combines a touchscreen, plenty of physical shortcut buttons, and importantly, physical volume and tuning knobs. The user interface isn’t the prettiest, but it’s easy to read and comprehend, and it responds quickly. Apple CarPlay and Android Auto are standard features on all models. Also offered is a heads-up display, an unusual feature for this segment and price point. It’s a color unit that displays on a clear plastic panel that rises up on the dashboard. 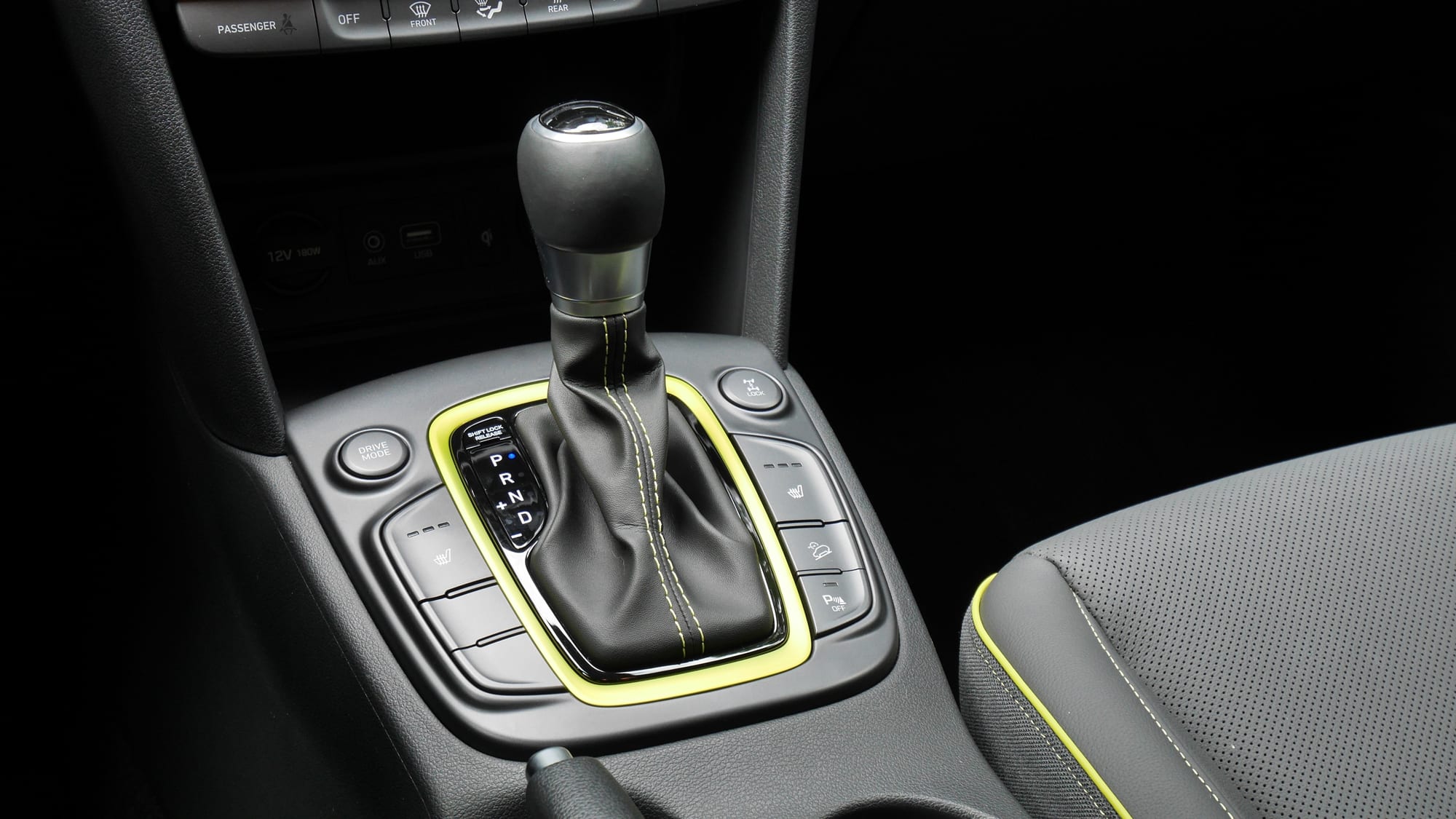 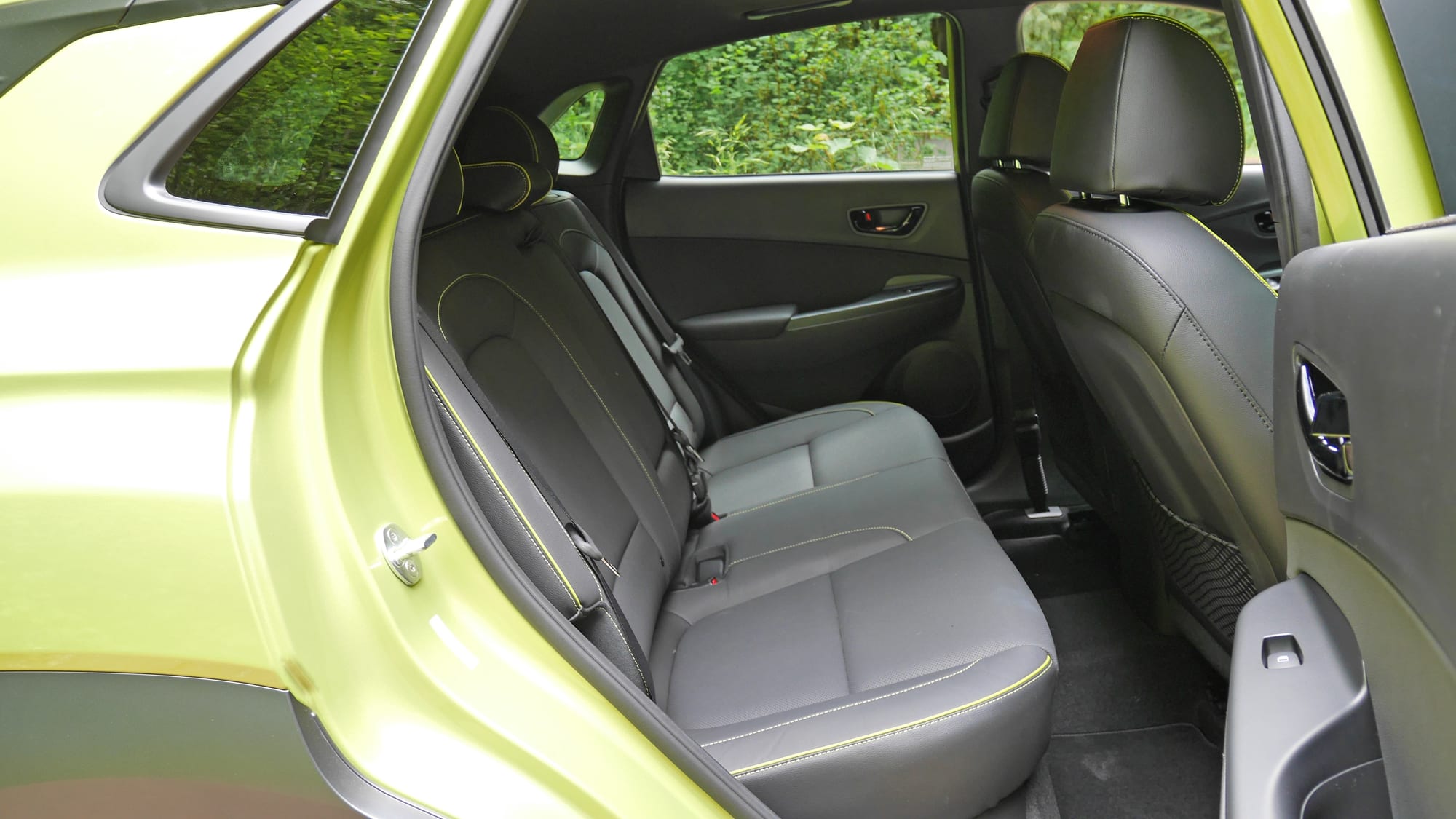 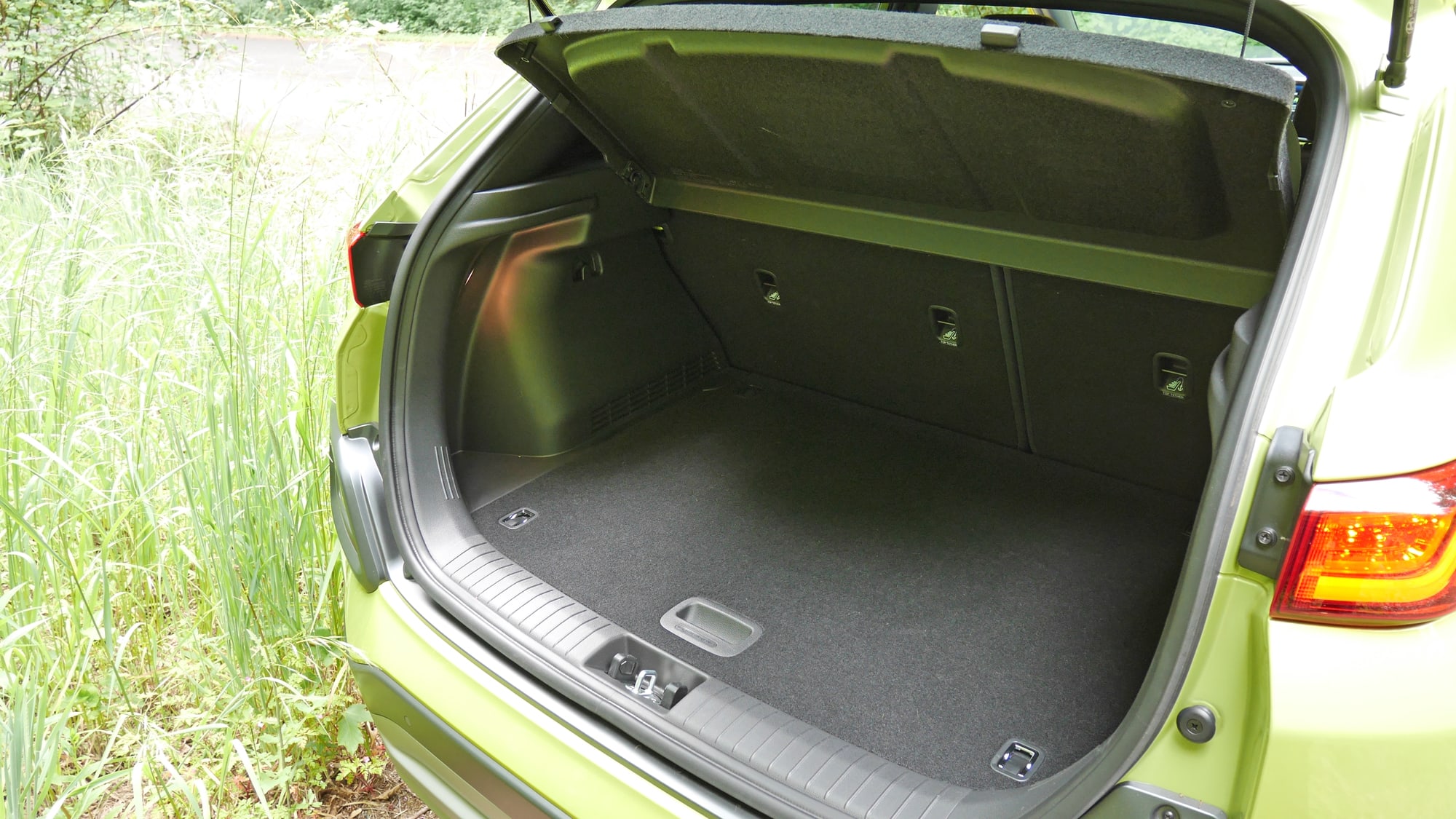 How big is Kona?

The Hyundai Kona is on the small side of the subcompact crossover class, which ranges from fairly tight vehicles such as the Kona and the Mazda CX-3 to particularly spacious vehicles such as the Subaru Crosstrek and Honda HR-V. It’s one of the shortest in overall length, and that’s reflected in particularly tight rear legroom. Your backseat passengers should at least be happier than they’d be in the even more cramped CX-3 or the claustrophobic Toyota C-HR.

Cargo space is also among the smallest in the class. According to the specs, there’s about 19 cubic feet of space behind the Kona’s raised back seat. That’s only 2 cubes less than the Subaru Crosstrek, which isn’t much on paper, but in practice, the difference is immense. We managed to fit two midsize suitcases, three roll-aboard-size carry-on bags and a small cooler bag in the back of the Crosstrek. A Nissan Kicks can fit even more. In the Kona, however, one of the midsizers and a roll-aboard had to stay behind. Its cargo area just isn’t as deep or useful, and you may need to consider a roof box for lengthier journeys. Again, though, it’s still better than the CX-3 or C-HR. 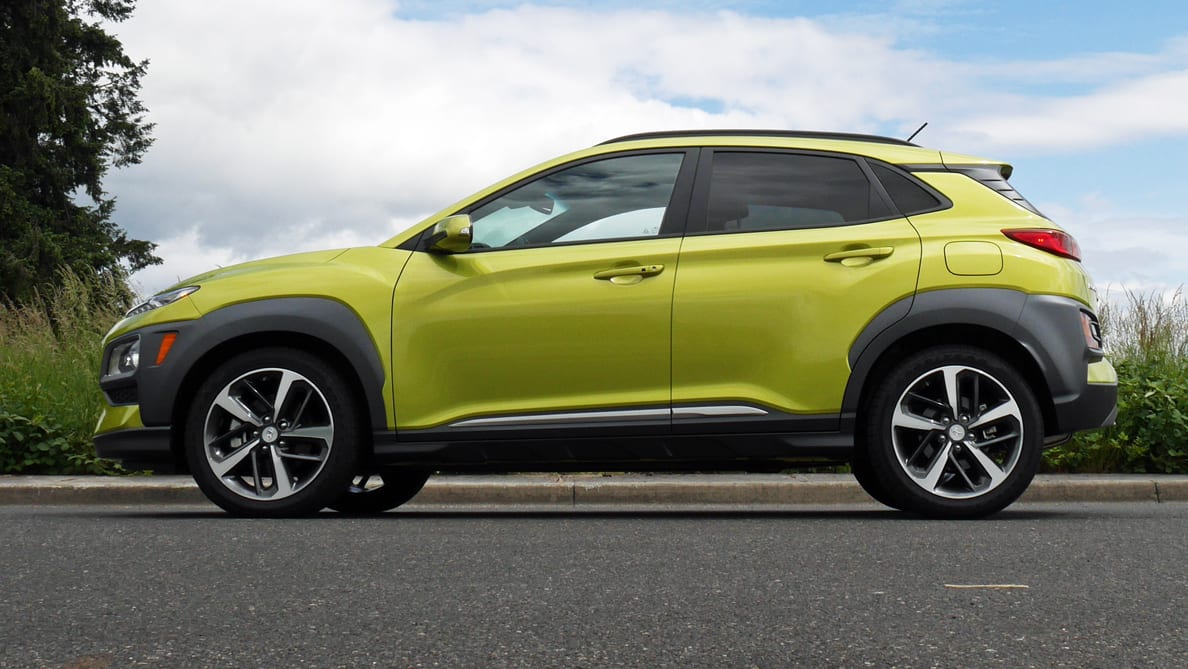 The Kona offers a choice of powertrains. The entry-level engine offered on the SE and SEL trim levels is a 2.0-liter naturally aspirated inline-four that makes 147 horsepower and 132 pound-feet of torque. It’s paired with a conventional six-speed automatic with a torque converter, and can be had with either front-wheel or all-wheel drive. The availability of all-wheel drive is a significant perk in a class where some competitors don’t offer it at all (C-HR, Kicks, Kia Soul).

Moving up to the Limited and Ultimate trim levels brings a turbocharged 1.6-liter inline-four making 175 horsepower and 195 pound-feet of torque. This engine comes with a seven-speed dual-clutch automatic transmission and is again available with either front-wheel or all-wheel drive.

Despite a big difference in power, both engines return nearly the same fuel economy when configured similarly. What changes things is what wheels are driven. Front-drive Konas are the most frugal, with the 2.0-liter model getting 27 mpg in the city, 33 on the highway and 30 combined, and the 1.6-liter model getting 28/32/30.

There is also a Hyundai Kona Electric. With its unique powertrain and higher cost than most Konas, we’ve reviewed it separately. However, it basically provides the same highs and lows as the gas Kona, but with the lower running costs and smooth, effortless acceleration afforded by an electric motor. 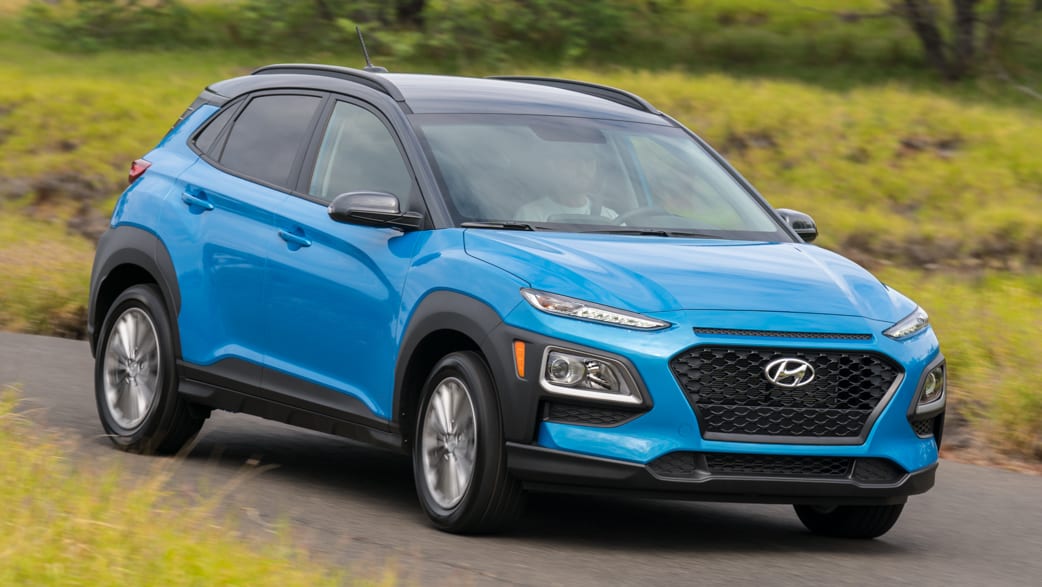 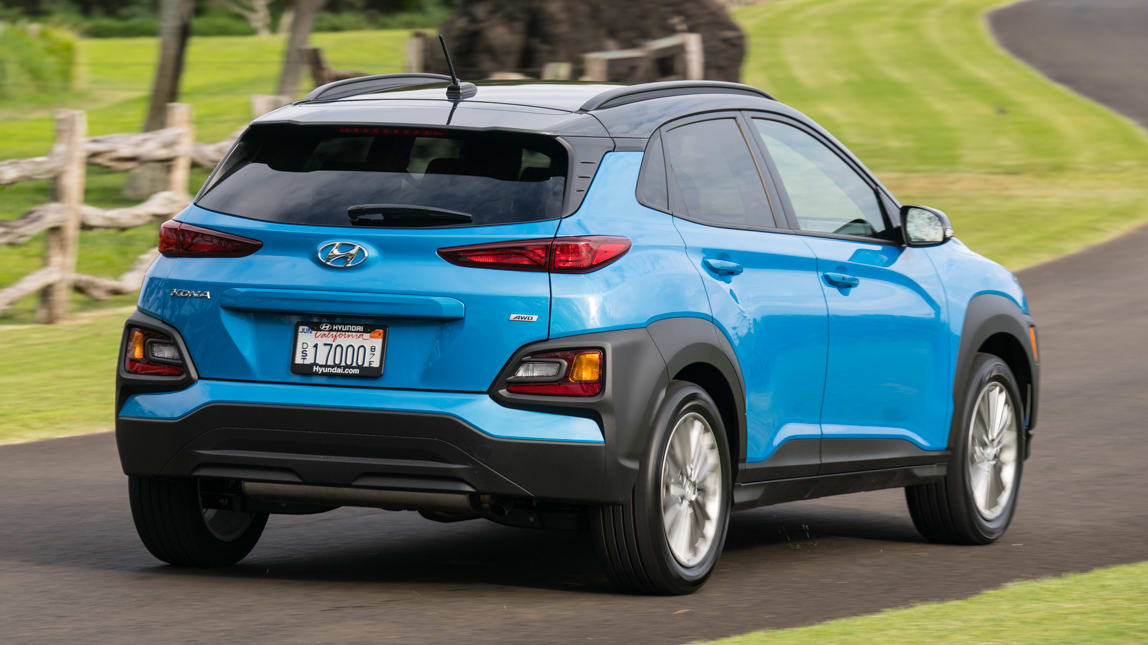 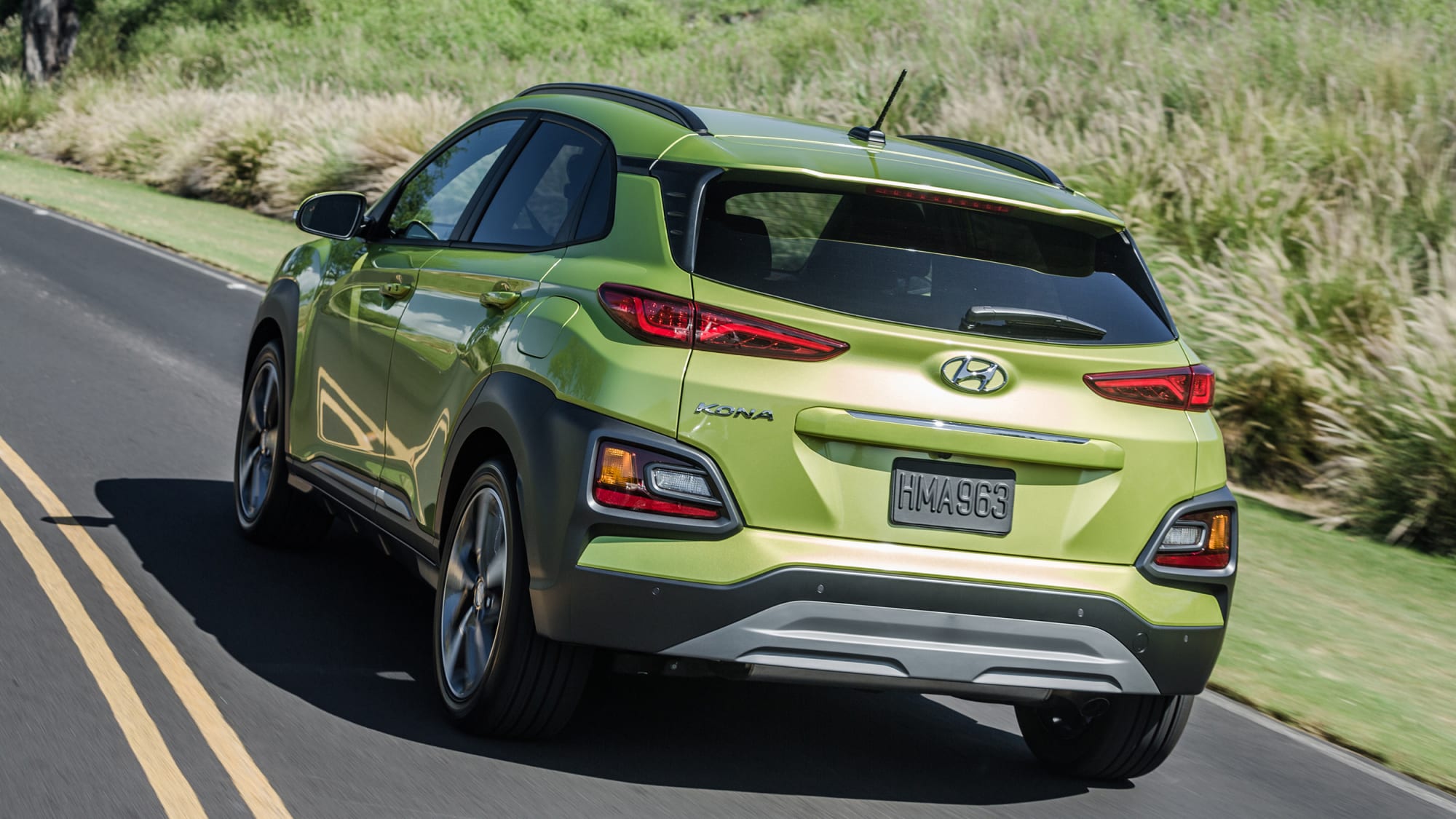 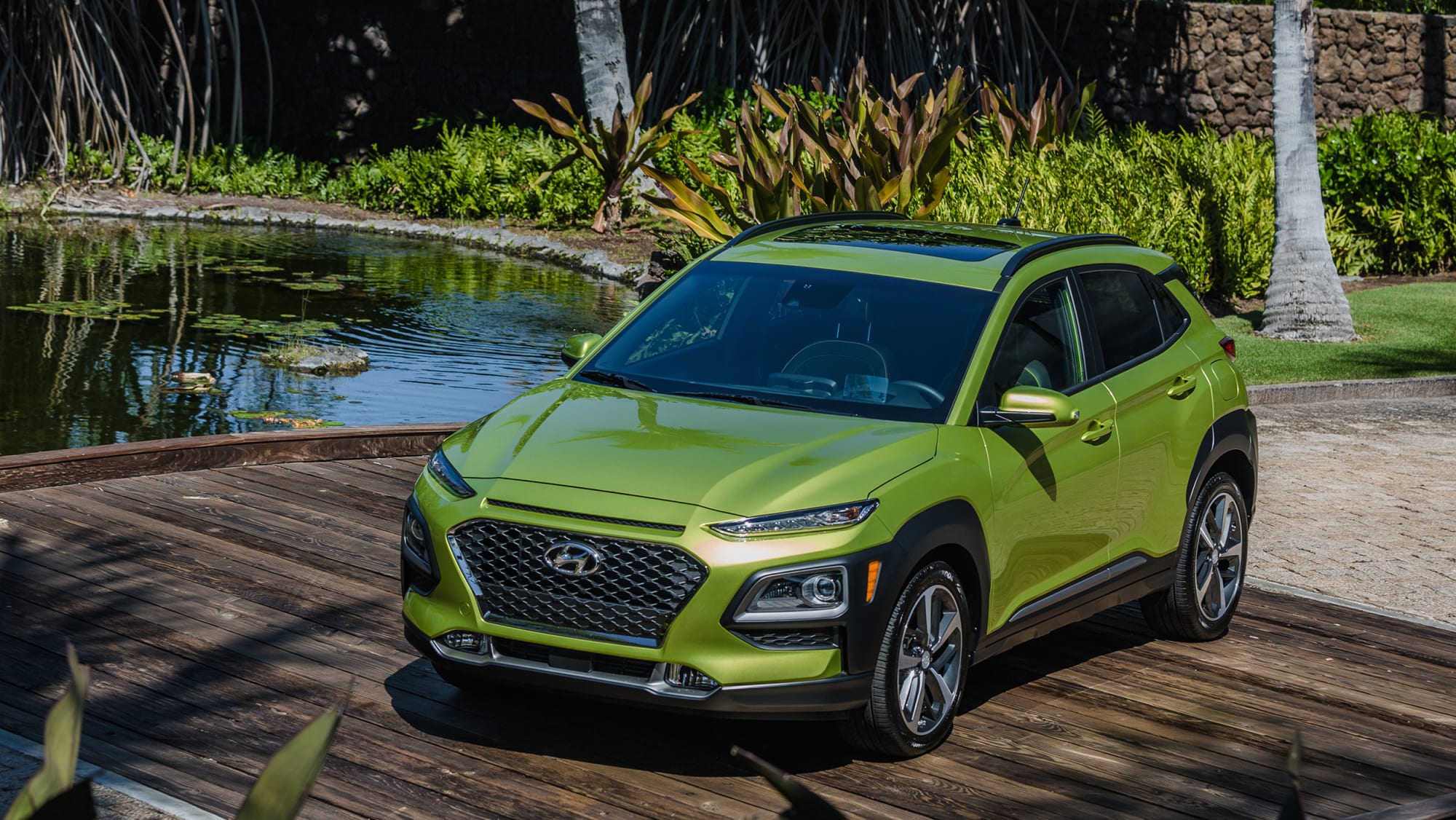 The Kona is an impressively nimble little crossover, regardless of the version you get. Steering is quick and well-weighted, and the car corners with only mild body roll. The great visibility and small size further add to its fun-to-drive nature. The ride is compliant and well controlled, but is a bit stiff relative to an HR-V or Kicks.

The base 2.0-liter engine in the Kona is right on par with the competition, which means it’s sufficient. It’s on the slow side and gets buzzy when flooring the throttle, but it’s also pleasantly responsive. Its torque converter automatic transmission picks gears smoothly and reasonably promptly (there’s even a Sport mode that sharpens transmission and throttle response even further). Altogether, it makes a compelling case to skip the turbo engine.

Of course, the turbo engine makes its own compelling case. Its 175 horsepower, 195 pound-feet of torque, and subsequent acceleration blow away almost everything else in the segment. It’s a difference you can absolutely notice and appreciate. It has a very strong mid-range and makes the Kona feel genuinely sporty. It can be a bit noisy like the 2.0-liter, but the power makes up for it. The turbo engine is paired with a dual-clutch automatic transmission that certainly shifts faster than the automatic and does well at picking a good gear. It’s also an improvement over past Hyundai dual-clutch transmissions, avoiding their hesitant responses at low speeds, but it also isn’t as smooth as the 2.0-liter engine’s automatic.

What more can I read about the Hyundai Kona?

We try out the Hyundai Kona’s more entry-level model with the non-turbo engine. 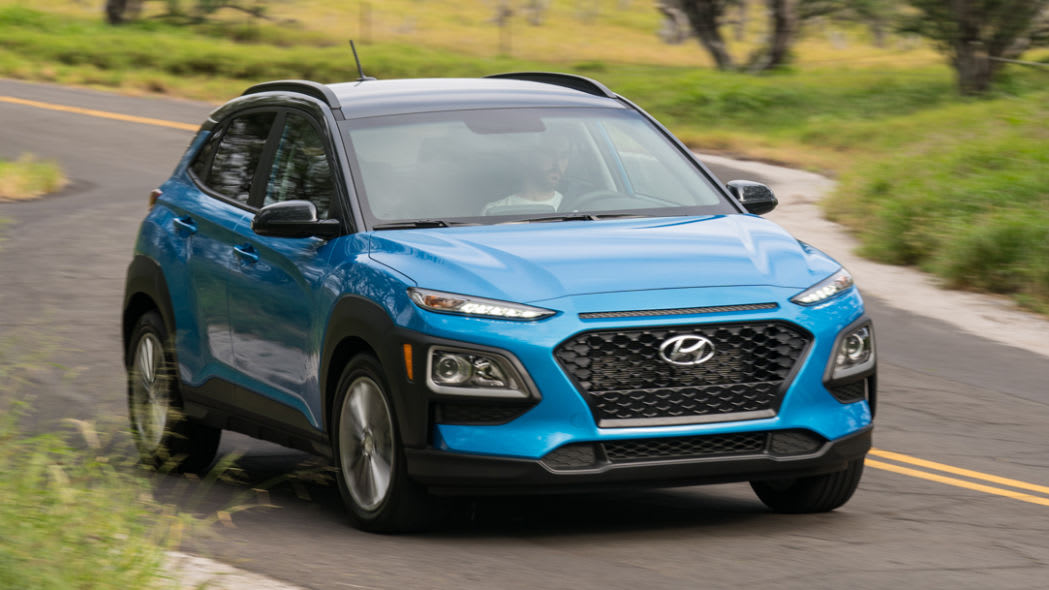 We drive the turbocharged version of the Hyundai Kona and take a close look at practicality. 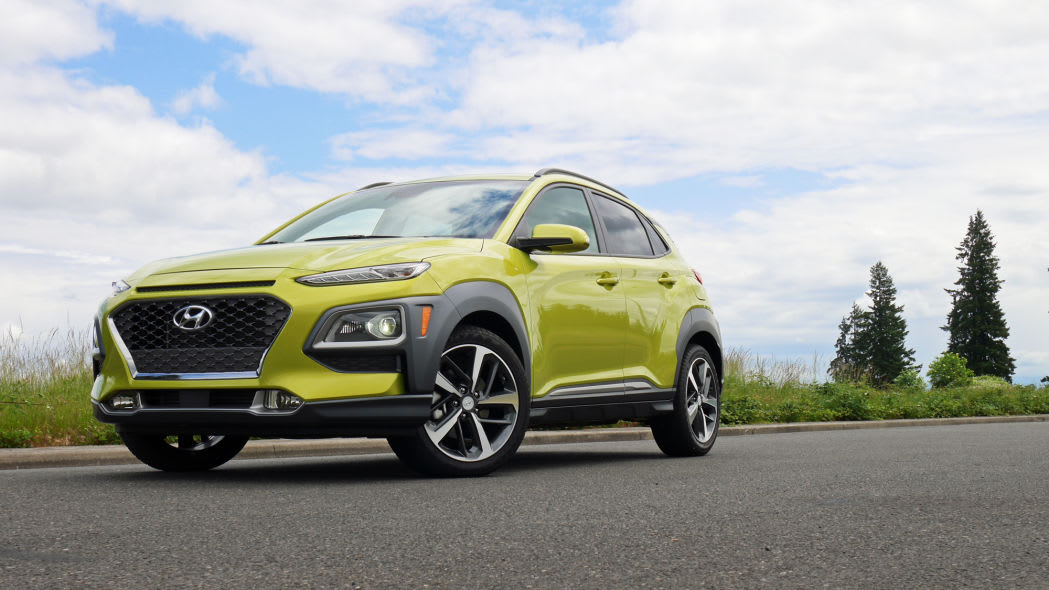 2020 Kia Soul vs. subcompact crossovers: How they compare on paper

We compare the Hyundai Kona’s specifications to the latest Kia Soul and other subcompact crossovers. 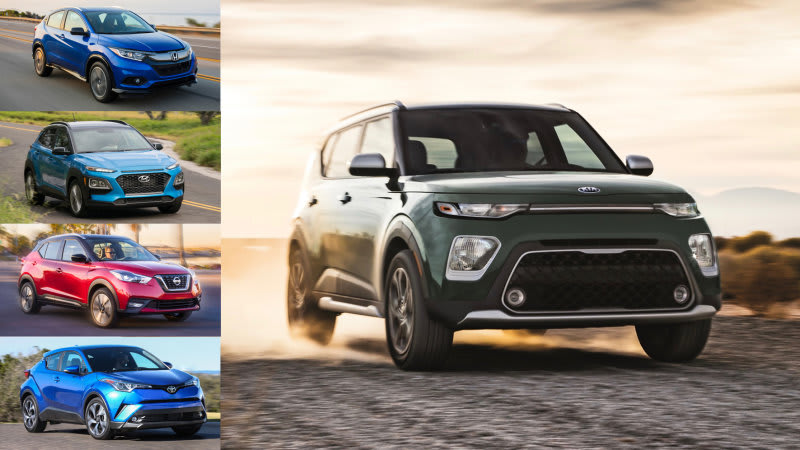 What features are available and what’s Kona’s price?

The base Hyundai Kona is the SE trim, and it starts at $21,035 for the front-drive version and $22,435 for the all-wheel-drive variant (all prices include a $1,045 destination charge). This Kona comes with the naturally aspirated 2.0-liter inline-four, a six-speed automatic transmission, 16-inch alloy wheels, cruise control, air conditioning, power accessories (windows, locks, mirrors), a 7-inch touchscreen, multiple USB ports, Apple CarPlay and Android Auto. Basically even the base model comes well-equipped.

Pricing for all other trim levels can be found below, but you can check out the complete breakdown of Kona features, local pricing and specs here on Autoblog.

What are Kona’s safety features and crash-test ratings?

Safety is a highlight for the Kona. The IIHS gives it its highest award of Top Safety Pick+ as a result of earning the highest rating of “Good” in all crash tests, the highest forward collision prevention rating of “Superior” and having optional headlights rated “Good.” The only weak points in IIHS evaluation include “Poor” rated headlights on base models and child seat LATCH anchors with “Marginal” accessibility. NHTSA also gives the Kona top ratings with five stars fro overall, front and side crash tests. It gets four stars for rollover potential, which is normal for the segment.

What competitors should I consider?

2019 Honda HR-V
The HR-V is a packaging champ, cramming more cargo and passenger space into its diminutive dimensions than anything else in the segment.

2019 Nissan Kicks
The Kicks isn’t as fun to drive as the Kona and arguably isn’t as cool to look at. But its low price, high equipment content and giant cabin are compelling.

2019 Kia Niro
It’s not as funky and its base price is higher, but the Niro offers more space — and since it’s a hybrid, considerably better fuel economy.