By Rodriguez Davis
88
0
Share:
The 2019 Volkswagen Atlas S 2.0T is the bottom rung on the Atlas ladder. It’s the least expensive ($31,890), least powerful and has the least amount of equipment. The cloth seats are manually operated, the steering wheel is urethane and there’s only one USB port. It has a four-cylinder engine in a segment dominated by six cylinders. So, is this three-row crossover still up to the family task when it’s been stripped down to the basics?

That 2.0-liter turbocharged engine is only available on the base S and is paired exclusively with front-wheel drive. Every other Atlas has the 3.6-liter V6 good for 276 horsepower and 266 pound-feet of torque, which is on the low end for the segment. As such, it’s not like you’re really giving up a lot with the four-cylinder, which produces 235 horsepower and 258 lb-ft, but it comes up much sooner in its rev range As such, the base engine doesn’t feel as underpowered as you might expect, and there’s more than enough guts present to actually cause torque steer when you gun the throttle coming out of a corner.

Actually, the two engines are a lot closer than you’d think. The six-cylinder is already underpowered for the segment and the upper trims weigh more, taxing the engine even further. The last Atlas I drove, a loaded SEL Premium, weighs about 500 pounds more than the S 2.0T, meaning the V6 is only burdened by 1 fewer pound per horsepower. To go one step further, in Car and Driver testing, the 2.0T was actually 0.7 second quicker than such a loaded Atlas.

My internal stop watch would certainly concur with their instrumented testing – the turbo just feels quicker. Now, would it feel quicker if it had to lug around an extra 500 pounds of all-wheel drive and fancy equipment? We’ll never know, that’s not an option. Would the V6 be stronger in the lighter, lesser-equipped SE trim level? Perhaps.

Fuel economy stands at 20 mpg city, 26 mpg highway and 22 mpg combined with the 2.0T engine, which matches the 22.0 mpg I achieved in 90 miles of mixed city, mountain and rural highway driving. That’s pretty much average for the segment, but keep in mind that most of those have six-cylinder engines. The Atlas’ V6, by contrast, is only good for 19 mpg combined.

Besides effecting performance, the 2.0T’s massive weight difference relative to a loaded Atlas is something you can absolutely feel when behind the wheel. The SEL Premium I previously tested almost feels like a previous-generation Audi Q7, crushing the road beneath it, and providing a sense of resolute presence and solidity that’s a trademark of German vehicles. That’s not present in the S 2.0T, which almost feels light on its feet and tossable by comparison. It’s definitely not either of those things when stacked up to a Mazda CX-9 or Honda Pilot, for instance, but it’s fine for the segment and the steering is pleasantly responsive, linear in its effort and free from the extra-numb on-center feel of other Volkswagens.

That said, the Atlas S 2.0T is very springy, with lots of body motions over undulations and speed humps. It definitely feels like the suspension was meant to be settled down by the extra weight that’s not present in the 2.0T. Despite that, it also greets manholes and broken pavement with a typical Germanic firmness. It’s quite frankly an odd combination of ride attributes: floaty sometimes, firm in others. 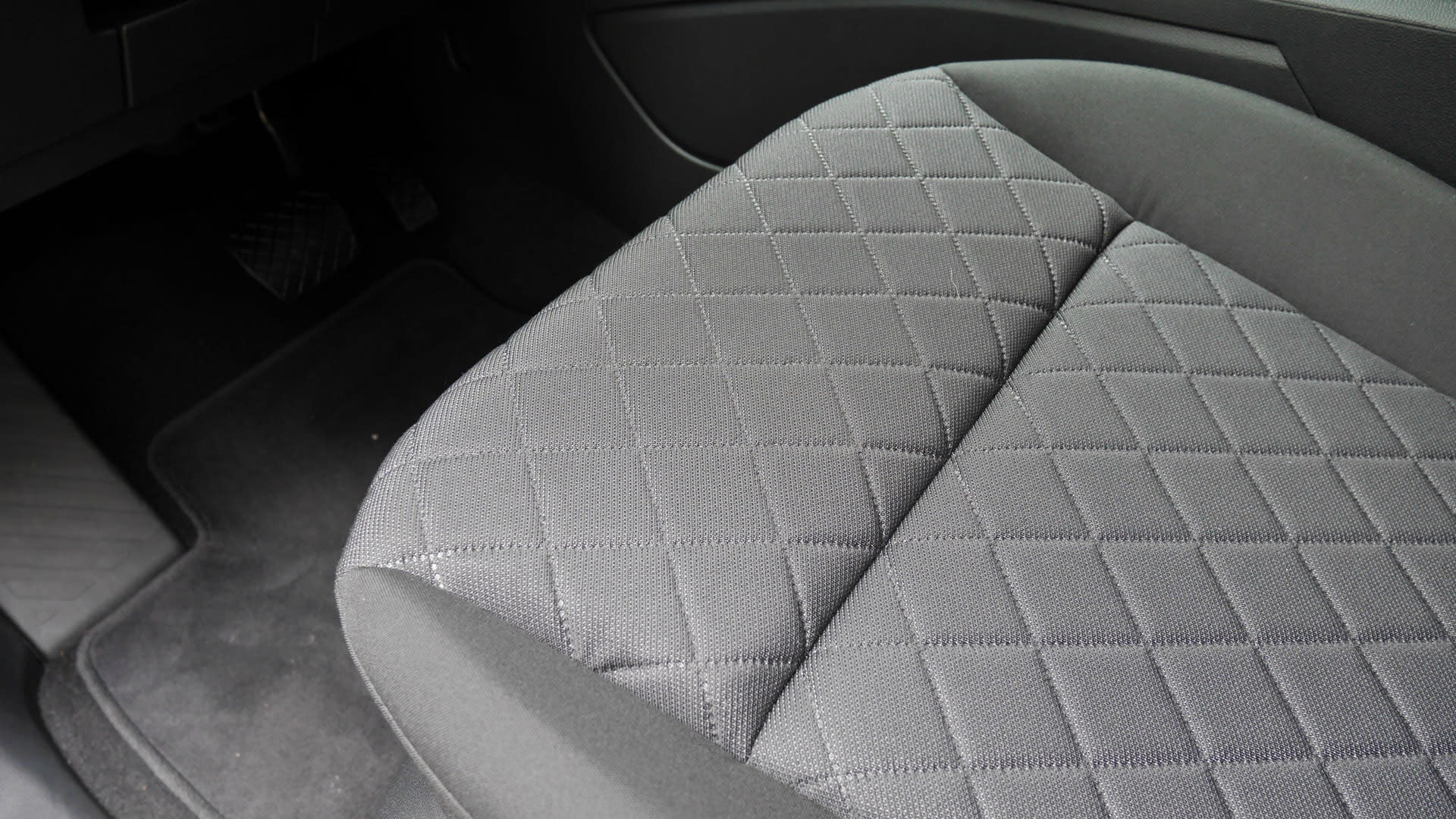 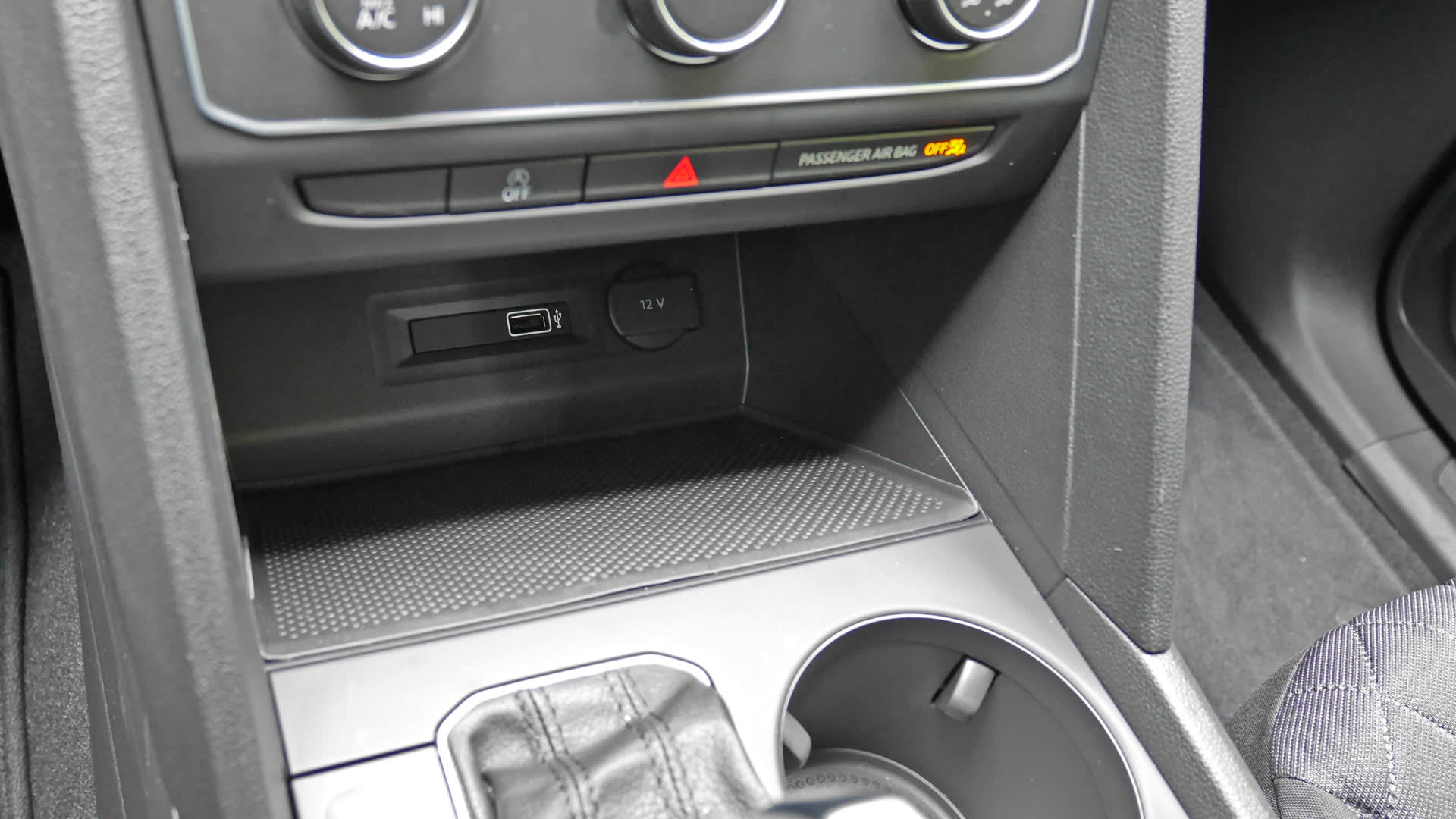 Inside, when you strip the Atlas of its wood trim, leather and extra equipment, it’s impossible to ignore the hard, seemingly cheap plastic on the doors and center console. The standard black cloth and metal-look silver trim are perfectly fine, but in general, this is just an unimaginative, plain-Jane interior. Admittedly, the base trim levels of its competitors are also similarly dark and monotone, but even something like a base Subaru Ascent has a more interestingly designed dash, while the materials quality in a 2019 Toyota Highlander LE I recently tested was indeed superior.

No longer can we expect Volkswagen to provide segment-leading interior quality as it once did, and as it continues to do in overseas market. American-market Volkswagens like the Atlas are all about abundant size and value. So if that’s important to you, it certainly delivers.

Indeed, the Atlas is absolutely gigantic. There is more headroom, legroom and under-thigh support in the third row than anything short of a minivan or Ford Expedition. I’m 6-foot-3 and I’ve fit quite comfortably in the third-row of an Atlas for more than an hour. There could perhaps be more seatback recline, but beggars, choosers, etc. There is also an abundance of space in the second row, which slides to a much larger degree than those of rivals to provide even more legroom to those in the third row, create extra cargo room or bring kids in car seats closer to mom in dad. The far-sliding second row also provides a much larger pass-through for third-row access – I’d wager it’s double what you’d get in a Toyota Highlander or Honda Pilot.

That’s the case with any Atlas, however. Up front, you’ll find a major difference with the S 2.0T in that it has a six-way manually adjustable driver seat. There’s lots of adjustment available, and it dips far down low enough in the rear to provide ample under-thigh support for tall drivers. Unfortunately, doing so put me awfully low in the cabin – the steering wheel barely tilted low enough and the door sill was higher than my shoulder. I was comfortable enough, though, and didn’t have this issue with the power seat that shows up on the second trim level rung, the SE.

Cargo space is exceptional. As you’ll see in the video above, you can fit four suitcases and an overnight bag behind the third-row, which officially measures as a 20.6-cubic-foot space. Only the Kia Telluride (21.0) and Chevrolet Traverse (23.0) surpass it, but the Atlas is so notably wide with extra space provided by cubbies located at the far edges, that I wouldn’t be surprised if it’s actually more functional. Needless to say, space with the seats lowered is gigantic. There’s 55.5 cu-ft with the third-row lowered (for perspective, that’s about what the old VW Tiguan had as its maximum capacity), while the 96.8 cu-ft with both rows lowered is bested only by the Traverse. The Telluride and 2020 Ford Explorer top out in the 87-cube range.

As for technology, the kids will be cheesed that there’s only a single USB port in the 2.0T and it’s located up front in the deep bin forward of the shifter. You get four USB ports starting with the SE trim, which also adds an 8-inch touchscreen versus the 6.5-inch one in the S, plus HD and satellite radio, a CD player and even an auxiliary audio jack (Bluetooth is at least standard on the S). The SE also gains simulated leather, heated front seats, a second-row center armrest, rear sunshades, a leather-wrapped steering wheel and a proximity entry and push-button start. That comes at a not-insignificant $4,600 price premium, which also includes the V6, but represents good value for the segment.

In general, though, the basic Atlas was perfectly fine with what it had, and certainly delivers on the basics of family transportation: oodles of space and an impressive safety resume that includes standard automatic emergency braking, blind-spot and rear cross-traffic warning, LED headlights, a rearview camera and the best-possible crash ratings from the government and Insurance Institute for Highway Safety. It also comes at a reasonable price and with VW’s industry best warranty of six years/72,000 miles.

Perhaps paying a bit extra for the nicer SE makes sense, but you certainly shouldn’t do it for the bigger engine, and the interior ambiance will be just as plain and dour. So yes, the base Atlas is still up to the family task.