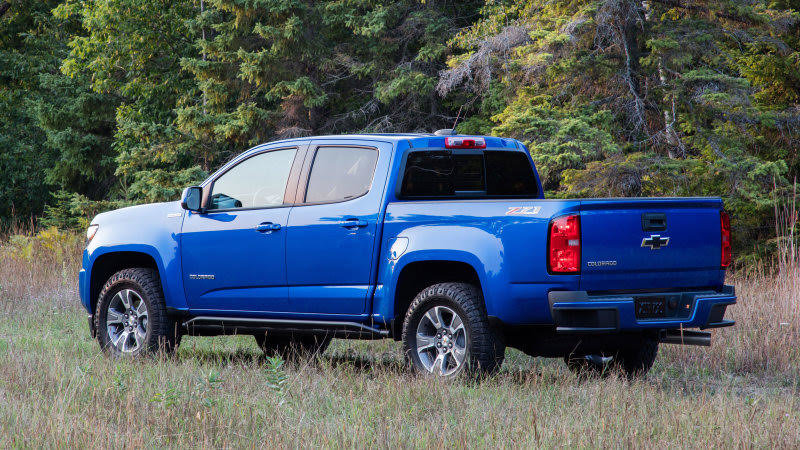 Chevrolet is no doubt feeling the heat in the midsize truck segment, what with all the buzz about its new competitors the Ford Ranger and Jeep Gladiator, but don’t look for any major updates yet to its Colorado pickup. GM Authority has the details on what the bowtie brand has in store for the 2020 version of the truck, and the changes are minor.

Chevy adds an optional remote locking tailgate on the Work Truck trim that’s standard on the LT, Z71 and ZR2 models. All models will get GM’s Tire Fill Alert, which provides visual and audible alerts outside the vehicle when you’ve sufficiently inflated a tire. LT models will come standard with the EZ Lift-and-Lower tailgate, which previously was an option.

Disappearing from the Colorado lineup will be the 2WD Z71 Extended Cab and 2WD Z71 Crew Cab Long Box models. The leather-appointed jet black/dark ash interior combo and Chevrolet Infotainment Premium system with Navigation (IOT) are also reportedly being 86’ed, the latter to be replaced by the Chevrolet Infotainment Plus system with Navigation (IOU). LT models will also need to have the Luxury Package and Crew Cab body style to get the jet black leather interior.

GM Authority says Chevrolet plans to reshuffle packages as well, adding the Safety Package with its forward collision alert and lane departure warning technologies as an option for Z71 models, previously available only on the LT. Going away are the Redline Luxury Special Edition Package and the RST Luxury Special Edition.

No changes are planned to the Colorado’s exterior for 2020. Powertrain options likewise carry over from 2019, meaning either a 2.5-liter four-cylinder, making 200 horsepower and 191 pound-feet of torque; the 3.6-liter V6 at 308 hp and 275 lb-ft; or the 2.8-liter turbo-diesel making 186 hp and 369 lb-ft of torque.
The Colorado is on its second generation, which launched in 2012. Chevrolet last fall introduced two new special editions for the 2019 model — a street-focused RST model and an off-road Z71 Trail Runner.