May 21, 2019May 21, 2019
Rodriguez Davis
Read Time : 6 Minutes
Over the course of three generations and nearly 17 years, the Porsche Cayenne has followed a similar format: a familiar 911-like face grafted onto a conventional SUV body. However, other brands have tried to shake things up with their own luxury SUVs, offering controversial, yet ultimately successful “coupe” variations. BMW X6, we’re looking at you. And so, in a decision that should’ve been seen as inevitable, Porsche has finally followed suit.

For the 2020 Porsche Cayenne Coupe, the front end remains unchanged, but the differences start with the A-pillar: The windshield features a sportier angle, the roof takes on a 911-esque arch, and the tail is pulled down low. The side windows mirror the 911 (and the Panamera), and the rear fenders are pushed out to accommodate a 0.7-inch wider track.

The roof is lower than on the regular Cayenne – by 0.78 inches, to be exact – but it is not as low as it looks. In fact, this Cayenne’s top would look rather bulbous if Porsche hadn’t utilized a few visual tricks. For example, the center section is not painted in the body color, but it is executed either in glass or, when the lightweight sport package is specified, in carbon fiber. And there is a massive roof spoiler, added exclusively for looks. For actual aerodynamic reasons, there is another spoiler, just above the taillights, adorned with a Gurney flap, and raised and lowered electrically. It is so big that it is clearly visible in the rearview mirror when raised. 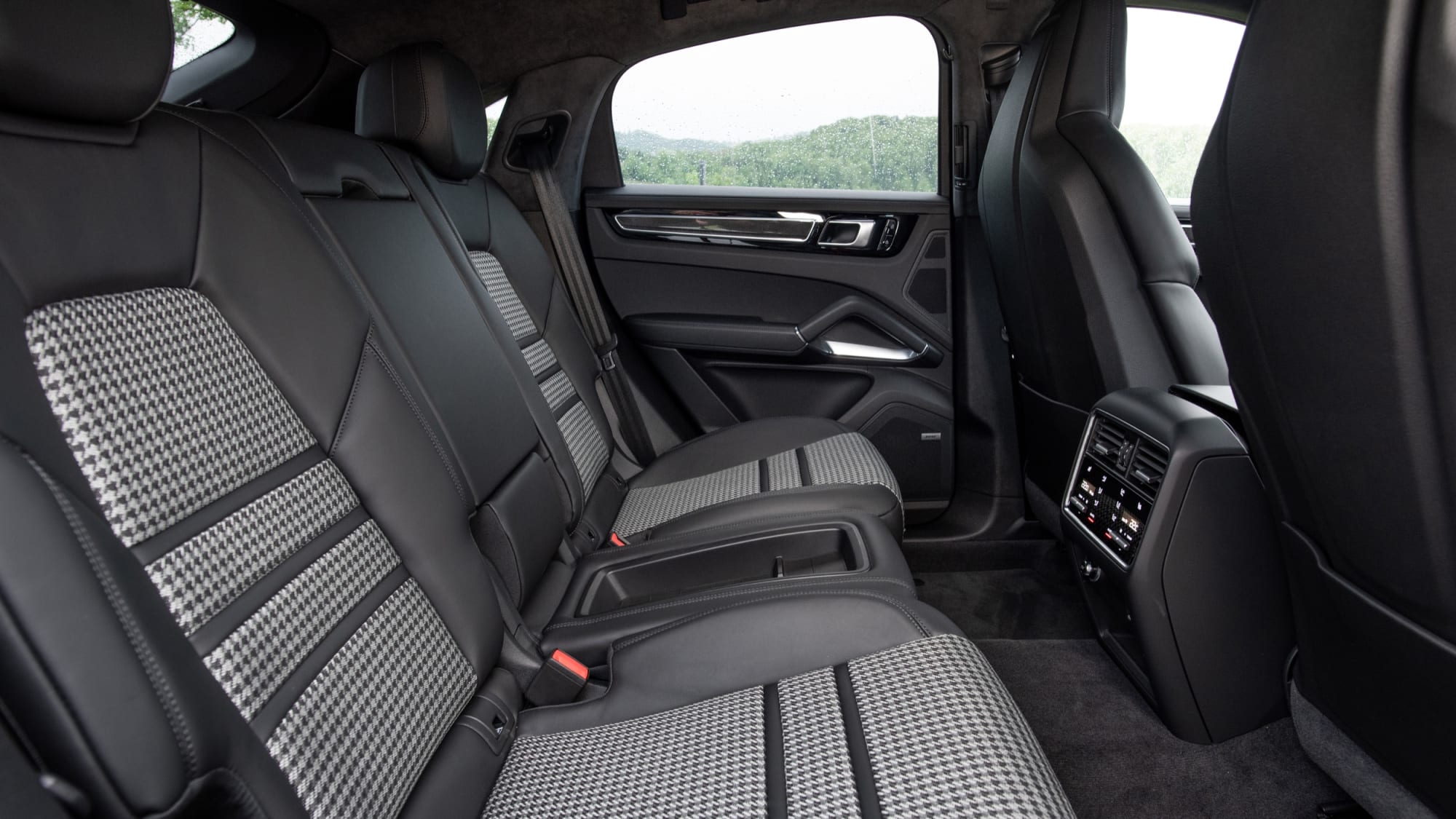 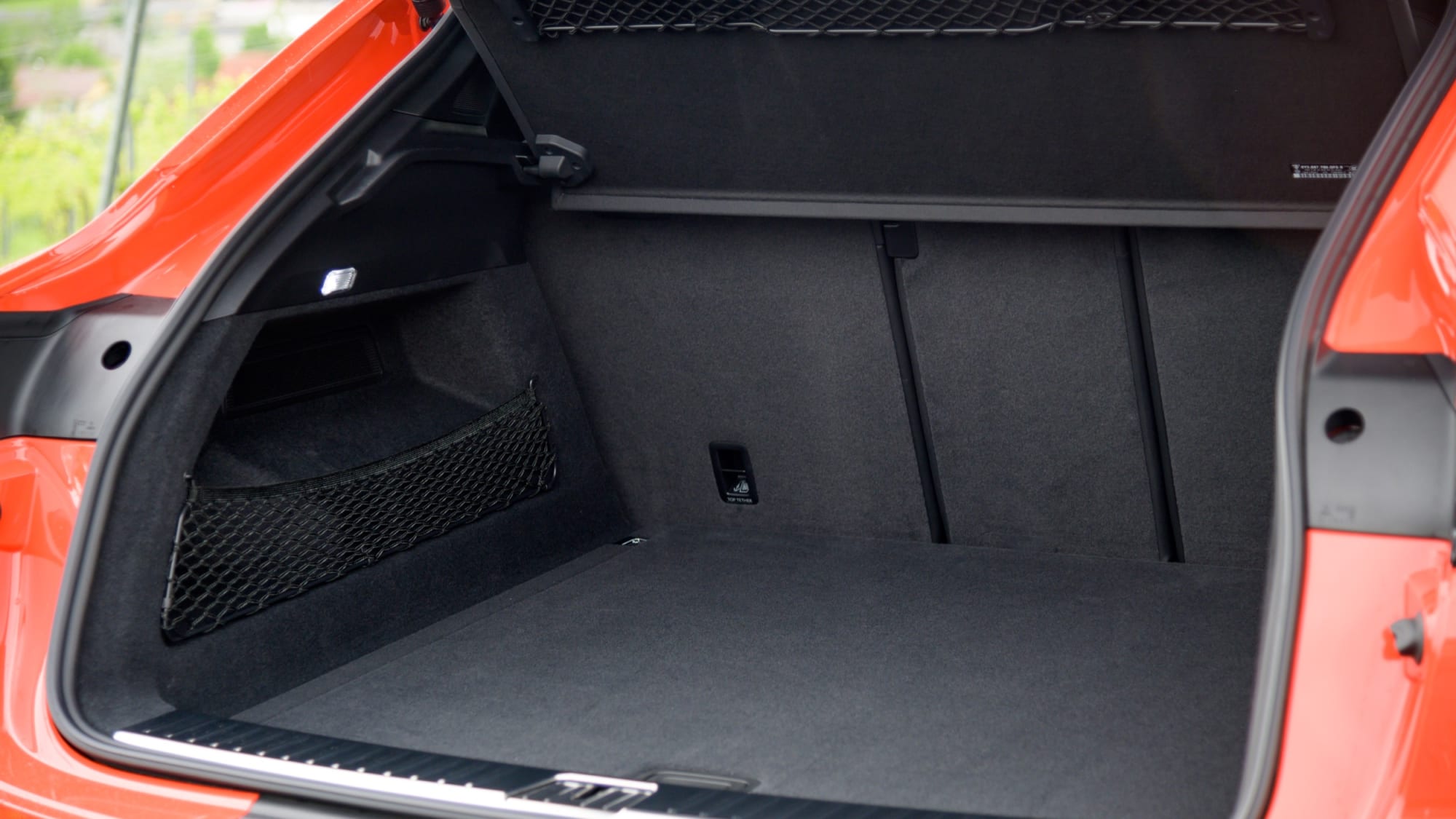 To preserve headroom, the rear seats are fixed in a slightly lower position, but that eliminates the possibility of sliding fore and aft. Two captain’s chairs are standard, but a three-seat bench is a no-cost option. Either way, the Coupe owner loses a bit of flexibility compared to the regular Cayenne, but the fixed position is virtually ideal. The front seats are lower by a few millimeters. Not surprisingly, cargo capacity is reduced – 22 cubic feet with the seats raised and 54.3 cubic feet with them lowered. The regular Cayenne’s figures are 27.2/60.3, which aren’t great for a midsize SUV, either. For another comparison, a BMW X6 has 26.6/59.7.

The driver looks at the same dashboard that graces the regular Cayenne models. It’s a familiar layout, but with the array of buttons replaced by a touch-sensitive glass center console and a wide TFT screen, featuring the corporate look shared with the Panamera and the latest 992 911. And there are the expected cutting-edge infotainment and connectivity options, too.

Porsche now has three different styles of automatic shifter. Luckily for the Cayenne Coupe, it uses the right motion (pull back for a manual upshift, push away for a manual downshift, unlike in the Macan) and it also doesn’t look like the 992 911’s “electric razor” shifter.

The ultra-powerful 4.0-liter twin-turbo V8 in our tester, which makes 541 horsepower and 567 pound-feet of torque, fires up with a hearty bellow. And it can’t wait to tear up the road: With a 0-60 mph time of just 3.7 seconds, the Cayenne Coupe Turbo moves with the alacrity of a thoroughbred sports car. Top speed is a lofty 177 mph. The eight-speed torque-converter style automatic shifts almost as quickly as a dual-clutch box, but it is better suited for towing – and it provides the torque overload at initial takeoff that many SUV buyers love. In heavily police-patrolled areas, we advise you to watch your speed closely: You enter triple-digit territory without effort – and sometimes inadvertently. 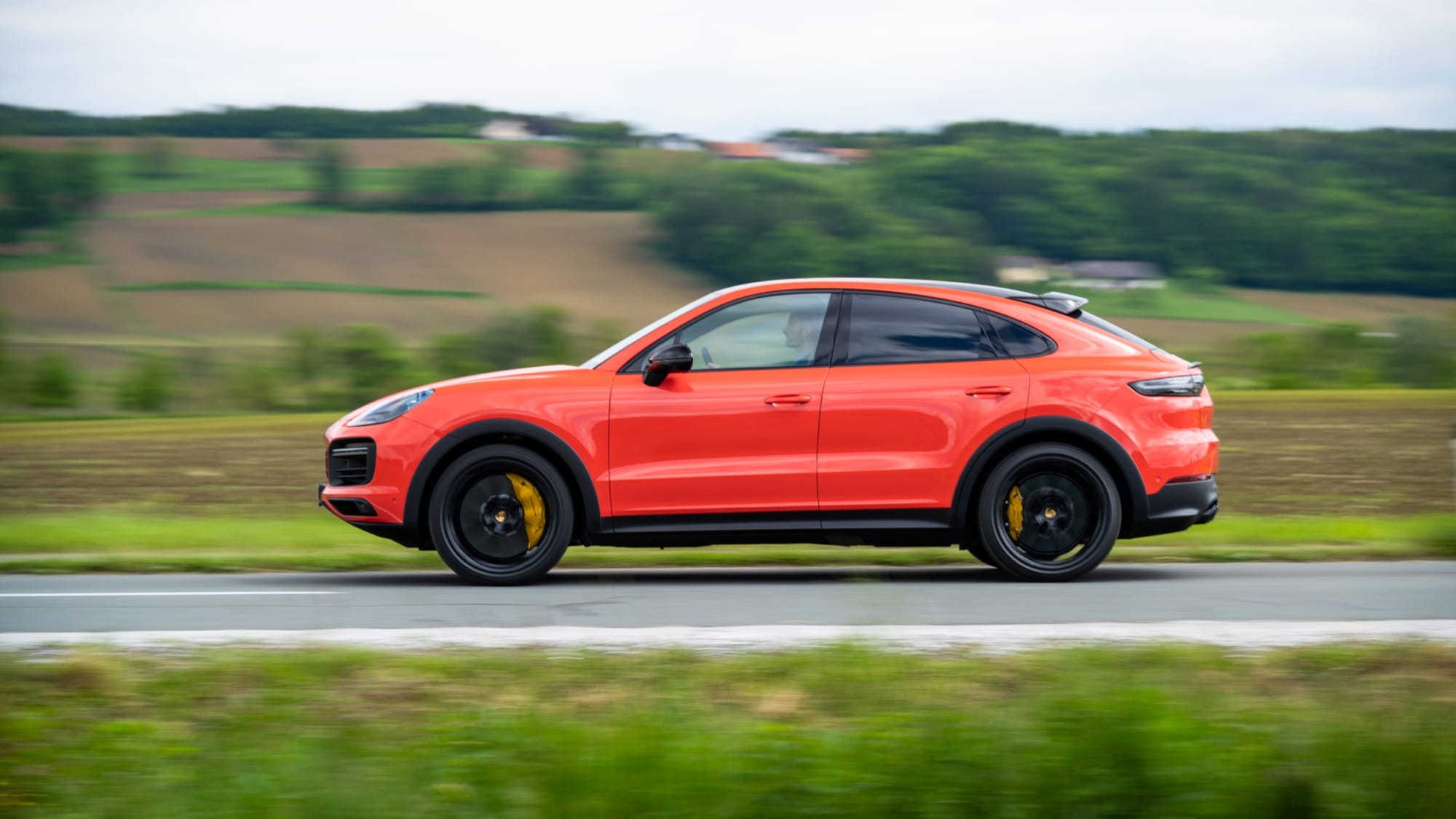 The competent suspension (air suspension is standard on the Turbo) can be further enhanced with a plethora of auxiliary systems, such as rear-wheel steering, torque vectoring, roll stabilization and ceramic brakes. Fitted with all of the above, the cornering capabilities of the Cayenne Turbo are almost surreal. The driver never loses the sense that he is piloting a sizeable SUV, but it can be tossed around curves and switchbacks at amazing velocities.

It is possible that a professional driver might notice the slightest of improvement over the regular Cayenne on a race track, thanks to the slightly wider track and lower center of gravity. But we had no regular Cayenne on hand for the purpose of this comparison, and the standard Cayenne certainly was not in need of improvement. Deciding to get the Coupe should be based solely on stylistic considerations.

That’s especially true since it isn’t that much more expensive than the regular Cayenne. Prices range from $75,300 for the Cayenne Coupe to $88,600 for the Cayenne S Coupe and $130,100 for the Cayenne Turbo Coupe. Although part of its higher price is definitely going toward style, there’s also a superior level of equipment, including larger wheels, the Sport Chrono package and the panoramic glass roof.

And thus, the Cayenne Coupe might be the most attractive SUV on the market now. The Cayenne’s design finally reflects its sporting capabilities, while the tradeoff in functionality is minor enough that going for Cayenne’s Coupe version seems like less of a tradeoff than the X5/X6 or most recent Mercedes GLE.