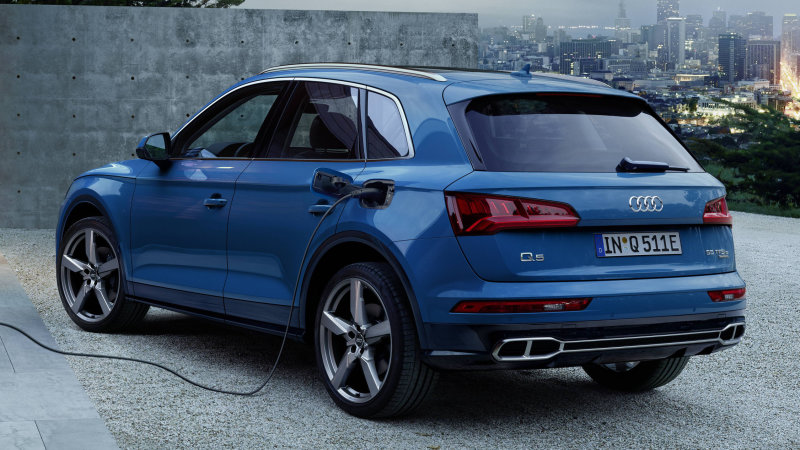 Audi took a big step into the plug-in hybrid game at the Geneva Motor Show this year, but details were light back then. Today, it’s officially taking the wraps off the Q5 plug-in hybrid, which it calls a 55 TFSI e Quattro in Europe — we’ll just forget that name exists. Now, this car isn’t being introduced for the U.S. market initially, but it’s fully expected to make its way here at some point. Audi even references the U.S. specs and figures for its new crossover.

The Q5 plug-in uses a 2.0-liter turbocharged four-cylinder and a single electric motor for propulsion. A total system output of 367 horsepower and 369 pound-feet of torque shoves this Q5 to 62 mph in just 5.3 seconds on its way to a 148 mph top speed. Those numbers are impressive – only 0.2 second off the SQ5’s 0-60 mph time. For comparison’s sake, it actually makes 13 more horsepower and the same amount of torque as the 3.0-liter turbocharged V6 in the SQ5. So yes, the hybrid is officially more powerful than the Audi with an S badge on it.

Switching gears to the electric side of things, Audi says the Q5 plug-in is good for “more than” 25.9 miles of all-electric range on the WLTP — keep in mind that number is likely to be lower when calculated on the EPA test. The 14.1 kWh battery is under the luggage compartment floor, but Audi didn’t provide a photo to see how intrusive it is. That electric motor is integrated with the seven-speed transmission, which transfers the drive torque to the all-wheel drive system. Top speed in electric mode is a decent 83.9 mph. Audi says it’ll take 2.5 hours to get a full charge from a 400V outlet, and approximately six hours on a standard 220V outlet.

There are three driving modes. At startup, the car automatically puts itself into EV mode, which keeps the gas engine from coming on unless you press the accelerator pedal past a certain pressure point. The Hybrid mode is a bit more complex. This activates when you have route guidance active or if you manually choose it. The system uses its knowledge of your route to strategically plan when the Q5 will operate in pure EV or in hybrid mode. For example, it’ll save some energy in the battery for surface street driving if your route includes a lot of highway miles at the start. This way you’re using the gas engine when it’s most efficient on the highway, and the electric power at its peak efficiency in low-speed driving. You’ll need to be using Audi’s built-in navigation, though, not Apple CarPlay or Android Auto. The last mode is called Battery Hold mode, and it keeps the battery charge at the same level the whole drive.

In Europe, the Q5 plug-in comes with a bunch of optional equipment as standard. This, plus the price you pay for buying a plug-in brings the price up to 60,450 euros in Germany. That converts to $67,465 here, but we expect final U.S. pricing to differ from that figure. Audi says the Q5 plug-in will be available for sale in the third quarter this year in Europe. As of now, there’s no launch date for the electrified version of the crossover in America.