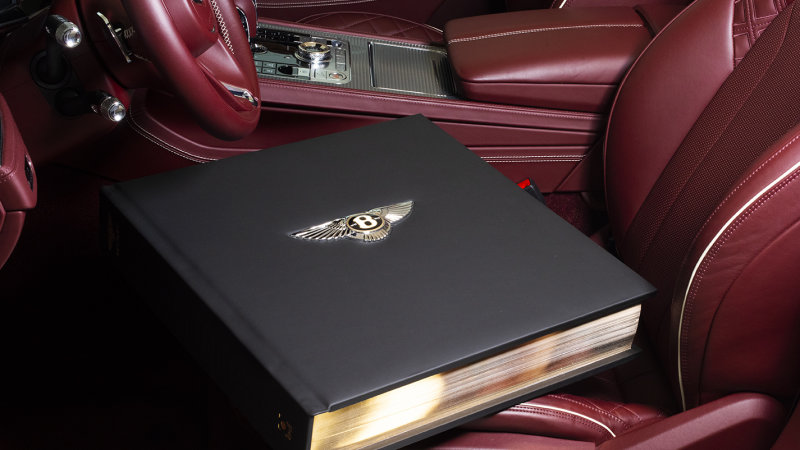 Bentley’s 100th anniversary might be remembered more for the book that celebrates the milestone more than the cars. The carmaker worked with Opus, a “luxury publisher” with the tagline “Greatness immortalized greatly,” on a tome that tells the story of the last 100 years. The limited-edition result of their work weighs roughly 66.5 pounds, is filled with exclusives, can be customized like a Bentley, and can cost more than a Bentley.

All come wrapped in hand-bound leather from the same herds that provide hides to Bentley cars, buyers able to choose what color leather they prefer. The cover is adorned with nothing other than the same special Bentley badge that gets affixed to cars during this anniversary year.

The content begins with a foreword penned by well known collector Ralph Lauren. Then the book spends nine chapters and more than 800 pages telling the story of W.O. Bentley and his Le Mans racers before lavishing time on the decades of brand-defining grand tourers, the limited editions, the one-offs, the designers, the craftsmanship, and the sports cars that have brought us to today’s GTs and limousines. In the last chapter, called “The Future,” current brand CEO Adrian Hallmark expands on what the next century will bring.

The Mulliner edition adds extras like 20-inch by 24-inch Polaroid photos highlighting ten of Bentley’s landmark cars, and 56 watercolors painted on silk paper. A piece of the left front Michelin tire from the Bentley Speed 8 that won Le Mans in 2003 will grace the inside cover of the Mulliner’s clamshell case. Owners can go further with customization, having their own Bentley photographs included in their copies, or having their cars photographed by Opus to be included. More equipment means more money, the Mulliner edition costing £12,500, or almost $16,000.

Beyond the Mulliner’s bespoke options, the 100 Carat edition encrusts the book with 100 carats of diamonds and a wings badge set in either white gold or platinum. As for all that ice, our guess is that, diamonds being the chosen tenth anniversary gemstone, Bentley multiplied ten by ten and voila. Before a buyer adds any of the options, the MSRP of the 100 Carat version is £200,000. A 2019 Bentley Mulsanne starts at £234,000. Insert something here about having it and flaunting it, and a Bentley owner who parks his Continental GT on the street so his 100 Carat book can live in the climate-controlled garage.

How the Humvee Compares to the New Oshkosh JLTV