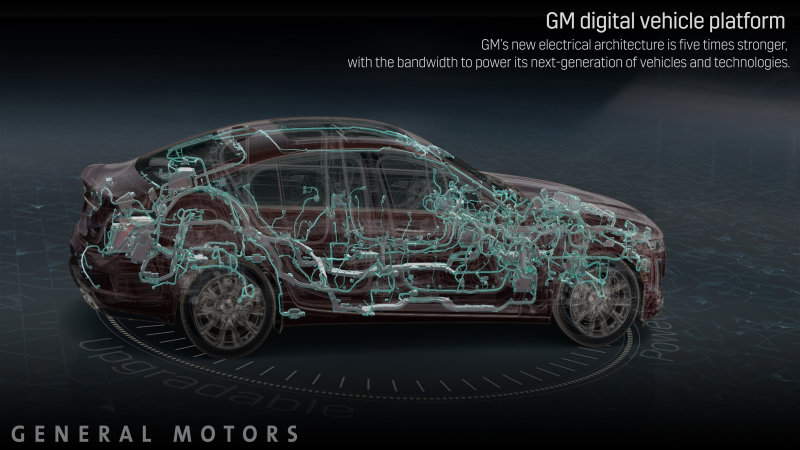 It appears to have dropped the sobriquet “Global B,” but General Motors’ new electrical architecture has bowed in drawings and video. This is the “digital vehicle platform” GM president Mark Reuss spoke to Reuters about in 2015, saying it would move a great deal of a vehicle’s computer work to the cloud and enable over-the-air updates. Reuss took the microphone for the debut, too, saying, “Our new digital vehicle platform and its eventual successors will underpin all our future innovations across a wide range of technological advancements, including EVs and expanded automated driving.”

The system will go into production later this year, appearing in dealerships first either on the 2020 Cadillac CT5 or the mid-engined 2020 Chevrolet Corvette. Yes, these are the same electronics cited for delaying the launch of the C8 Corvette over excessive draw, security and getting the more-than-100 computer modules to communicate seamlessly. When Car and Driver asked about that, GM replied with “No comment.” Volkswagen’s having the same issues with the Mk8 Golf right now, though, so GM isn’t alone, and this will be the new normal among OEMs for a while.

What’s certifiable is that the new architecture is robust enough to handle 4.5 terabytes of data per hour, which is five times what GM’s current wiring can handle. And thanks to Ethernet connections of 100 Mbps, 1 Gbs and 10 Gbs, communication within and without the vehicle happens much faster.

The advances mean better screen resolutions, better battery management for hybrids and electric vehicles, the capability for over-the-air updates and “functionality upgrades throughout the lifespan of the vehicle.” Cadillac’s Super Cruise has already been lined up as a leading candidate for constant improvements in the driving assistance suite, a key part of GM’s “vision for a world with zero crashes, zero emissions and zero congestion.” And whenever GM decides to take the plunge, it will mean a 48-volt electrical system.

More than 300 specialists worked on the digital platform, and security was a huge part of the task. We’ve already heard that GM consulted with Boeing and military contractors on how to prevent hacking. The carmaker has an internal Product Cybersecurity group that reached out to the research community, and created a “bug bounty” program to crowdsource uncovering any flaws. As told by Wired, GM had “assaults by ‘red team’ hackers probing for weaknesses” and “[benchmarked] aviation and defense systems.”

After its retail launch this year, the new electrical architecture will roll out to “most” GM vehicles around the world by 2023.

BMW Z4 adds manual transmission, and so could the Supra