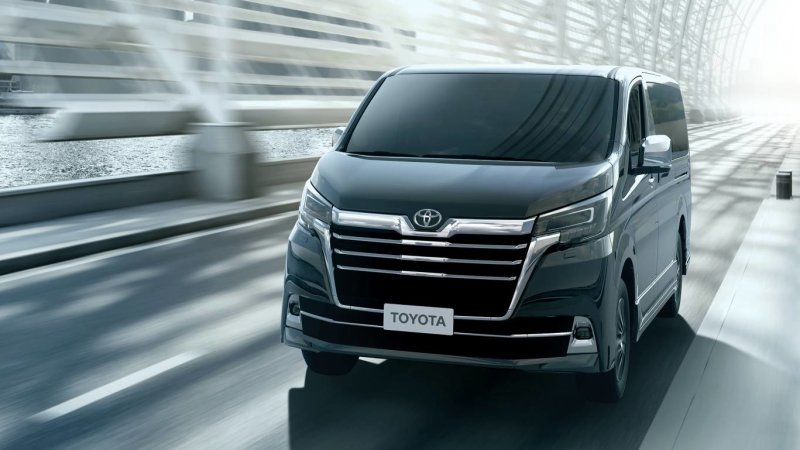 Remember that ultra-luxe Lexus LM minivan from a month ago? Well, we certainly haven’t forgotten, and Toyota just released another new van to fawn over. It’s not as luxurious as the LM, but it’s also going to be far cheaper for the folks who end up buying it. Let us introduce you to the all-new Toyota Granvia.

The Granvia is based-off the Toyota HiAce, which is actually more of a commercial van than anything. However, Toyota takes a significantly different tack with the consumer-friendly Granvia. Just look at the interior. There’s no partition like the LM, but the chairs are still stunning compared to any minivan on this side of the world — and yes, the rear chairs are powered, too. Upwards of eight people can sit comfortably in the massive van. We’re really digging the amount of comfort and luxury provided by the interior, even if it’s several magnitudes of luxury below the Lexus LM.

Here’s how Toyota VP of sales and marketing Sean Hanley describes the Granvia. “Whether you are in need of a five-star hotel shuttle, corporate transport for senior executives or just a large luxury family wagon, the new Granvia fits the bill.” We’re liable to agree with him, as this van looks like a seriously grand place to spend time in.

As for the exterior, there’s a blend of family van and commercial van going on in the styling. The sharp angles and boxy shape scream commercial van to us, but then there are serious touches of style all over to break up that feeling. That grille isn’t quite as gruesome as the Lexus LM, but it’s still huge with a gaudy design of its own. Then the rear hatch and taillight design takes us for a bit of a trip with the massive L shape.

Of course, something like this is not going to be for sale here. The new Granvia is initially launching in Australia and will be sold with a diesel engine only. Meanwhile, we’re going to have to stick it out with the Sienna. Don’t get too down, though, as that van is due for an update soon.