By Rodriguez Davis
267
0
Share:
Somehow the 5,000-year-old wood that makes up the truck’s bed comes up first. “It’s reclaimed black peat oak from a bog in Ireland,” says Jonathan Ward, Icon’s CEO and chief designer, showing me the bed of his latest Icon Chevrolet Thriftmaster pickup. “When it comes to the wood we can do anything, we work with a cabinet maker in the Carolinas. Recently we built a truck for a pro baseball player and used Louisville Slugger White Ash.”

Icon is best known for its big-buck custom Broncos, but pickups have always been a big part of its business. It has built Toyota FJ45s for years, and it has turned out four custom one-off trucks – including a 1965 Ford F-250 crew cab 4×4, which is still one of Ward’s favorites. That truck launched its Icon TR line of LS-powered 1947-1953 Chevy Thriftmaster pickups in 2013, and the company has built eight since then, with three more now in production.

They cost an average of between $235,000 and $260,000, but this Five-Window 1952 Thriftmaster is the most expensive example Icon has ever built. About 40 percent of the company’s clients have two or more Icons, and this truck was built for a repeat customer Ward describes as a performance hound. It’s the first Icon TR to get a supercharged LSA engine, independent rear suspension and a six-speed manual. 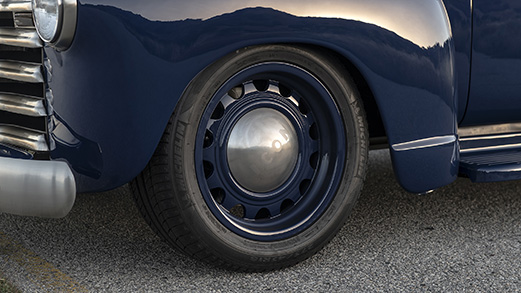 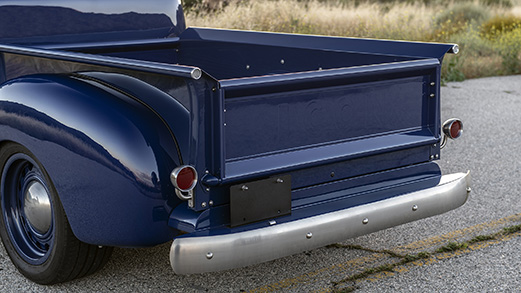 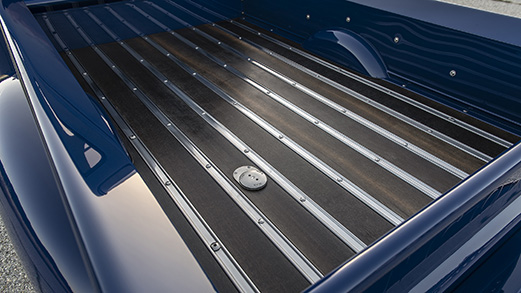 Ward has had a thing for these Thriftmaster 3100s long before he started TLC and began restoring and restomoding Toyota Land Cruisers professionally in 1996. He had already restored nine in his spare time and first met his wife Jamie, now Icon’s CFO, while he was laying under one of those Chevys.

“I just like their shape and the fluidity of them,” he says. “The design makes them look like they’re older than they really are, but they have more interior space and better ergonomics than trucks from the 1930s. Unfortunately they suck mechanically. I have no patience for them stock. They’re a farm truck.”

Like its Broncos, each Icon TR is completely hand-assembled and reengineered at the company’s 75,000 square foot facility in Chatsworth, California. Ward starts each build with best Thriftmaster he can find, then tosses everything but the bodywork into the trash. 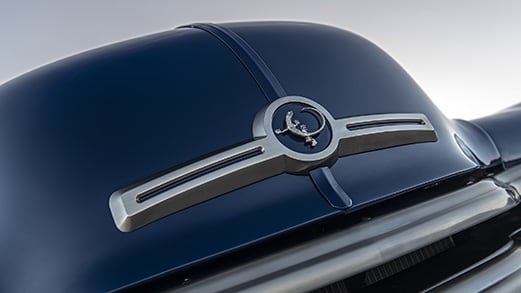 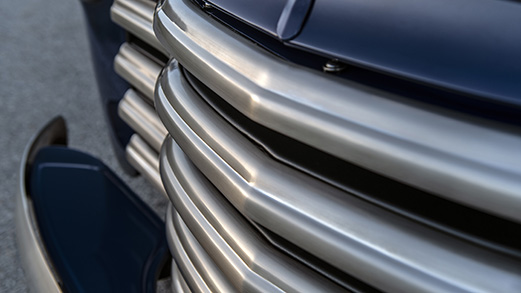 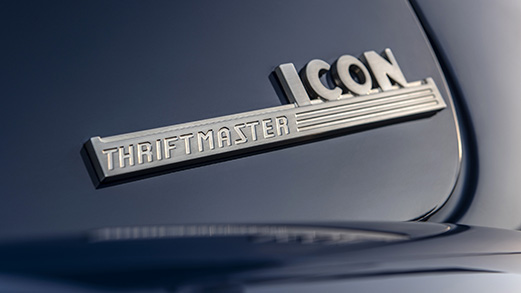 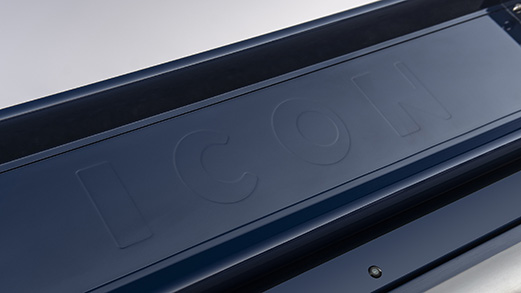 A square tube chassis is supplied by Art Morrison and fitted with Strange coilovers, independent tubular A-arm front suspension with a sway bar and on this truck an IRS with an aluminum Dana 60 third member, 3.73 gears and sixth-generation Camaro half-shafts and geometry. To make room the bed has been raised four-inches. Icon has also fitted minitubs to fit the truck’s 275/45R18 Michelins Primacy tires. Its forged aluminum wheels are custom one-offs fashioned after Artillery Wheels from the 1930s, and they may be our favorite part of the build.

Aside from tinted glass, the rest of the body is stock. The original gas tank is no longer behind the seat. Now there’s a 25.6-gallon stainless steel tank beneath the bed. “It helps with weight balance because the ass is so light,” says Ward. Chrome is available, but the bumpers and trim on this truck are nickel plated.

To handle the additional power of the 6.2-liter LSA, Tremec also supplied a large 12-inch clutch along with the T56 Magnum. Most trucks get a 430-hp LS3, a 4L65E four-speed automatic and a nine-inch with a limited slip, but Ward will basically build anything a customer wants. 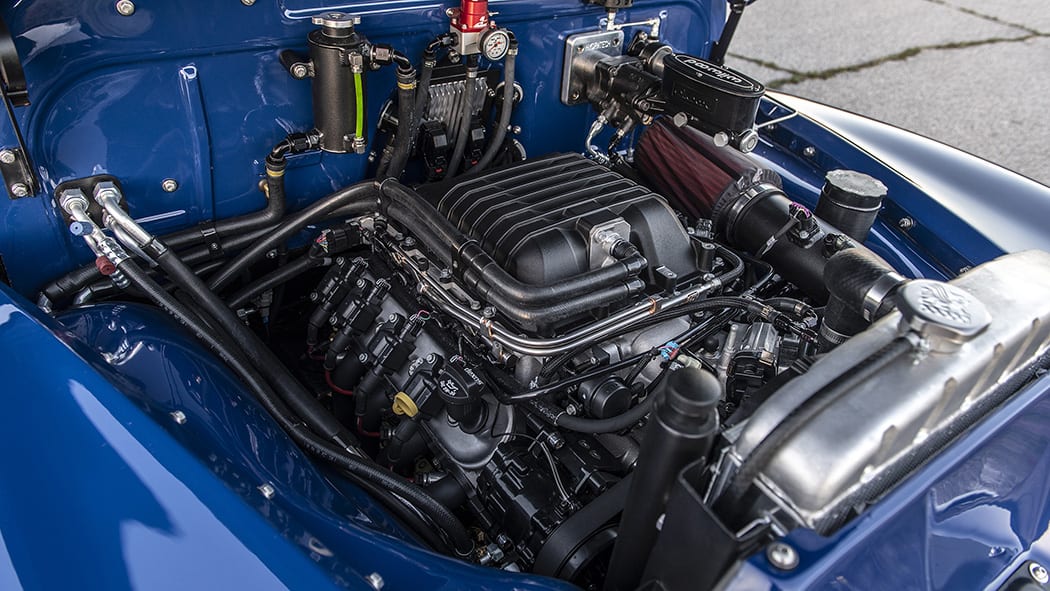 With a twist of the key the LSA E-Rod thunders to life like it belongs in a NASCAR garage. The engine is 50-state legal, even after Icon fits a 2.5-inch stainless dual ceramic-coated exhaust system. But there aren’t any visible exhaust pipes. Instead there’s a turndown hidden in each of the Chevy’s rear wheel wells and the V8’s roar echoes off the shop’s concrete floor.

That’s one way to put it. Chevy rates this engine at 556 horsepower at 6,100 rpm and 551 pound-feet of torque at 3,800 rpm, and out on the road the truck can overpower its rear tires in first or second gear from about 25 mph. Stomp the pedal and the Michelins light up, but the truck isn’t a handful.

It’s surprisingly easy to drive, and it’s comfortable. Its chassis feels tight, even over rough patches of road. The clutch requires a bit more muscle than the clutch in an Icon Bronco, but it isn’t heavy enough to be an issue. The drilled aluminum pedals are well-placed and heel and toe downshifts come easy. 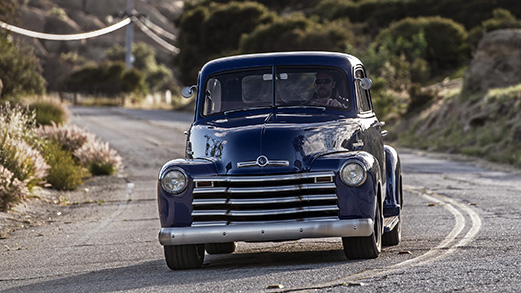 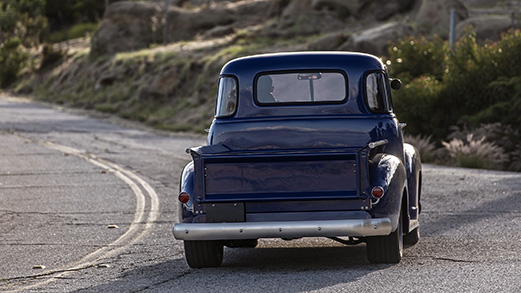 Traffic is light so we make some noise, throwing gears at 6,000 rpm, leaving black stripes at every green light. Ward says it’ll get rubber in fifth. But the Icon can do mellow too. The engine has so much torque you can drive it around town in third or fourth without any issues and at 80 mph in sixth gear, the blown V8 is revving just 1,800 rpm.

Icon stuffs the truck’s leather-covered bench seat with memory foam, so there aren’t any springs and the support it offers feels modern. It’s a small cab. There’s plenty of headroom but there’s just enough legroom to get comfortable if you’re about six-feet tall.

The 1955 Chevy Bel Air steering wheel, which has been cut down to 16 inches and covered in leather, is a cool touch and the Dakota Digital gauges look right and glow red. Every truck gets power windows and locks.

But the best part of the truck’s interior is its long, period-correct shifter, which is topped with an oversized black ball engraved with a white H-pattern. You can’t really speed shift it, but it’s visual perfection and its action is wonderfully mechanical. 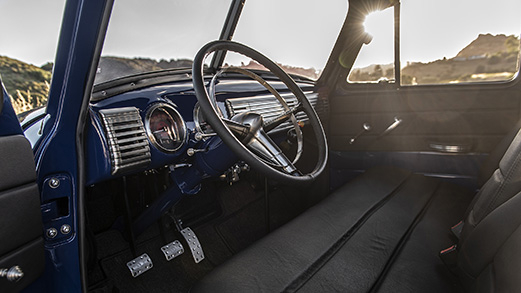 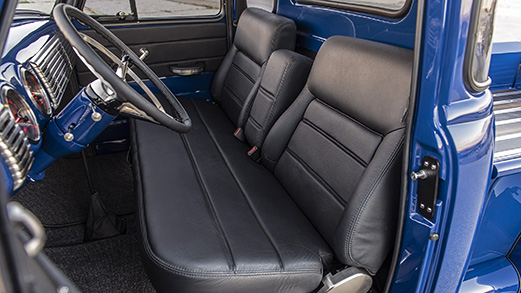 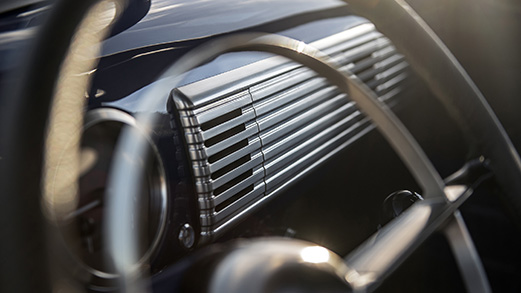 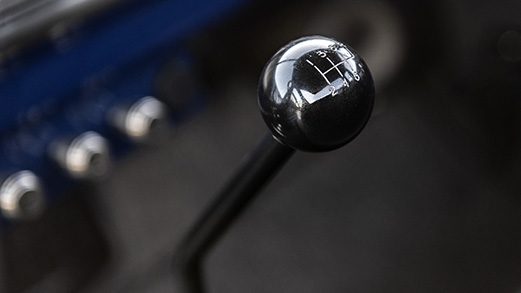 Just as it does on its Broncos, Icon coats everything in Line-X and Dynamat to keep the truck’s cab quiet. After a few minutes on the road we roll up the windows and crank the air conditioning. The cabin is impressively isolated from the outside world, however no amount of deadening can quiet the aural violence of LSA, popping and banging on the overrun.

The guy in the next lane gives us a thumbs up and yells over, “That’s a beautiful truck man. Super cool.” He’s the second to compliment the Thriftmaster in the last few minutes. We’ve recently driven Icon Broncos on these same streets on two separate occasions and no one seemed to notice.

With its longer wheelbase, lower center of gravity and independent suspension, this pickup also handles considerably better than the Broncos. It weighs 3,770 lbs, but there’s very little roll in the corners so it feels natural to drive quickly – in stark contrast to the much taller Broncos, which take a little getting used to. I’m not sure I’d want to hammer it down a mountain road, but I wouldn’t be afraid to. 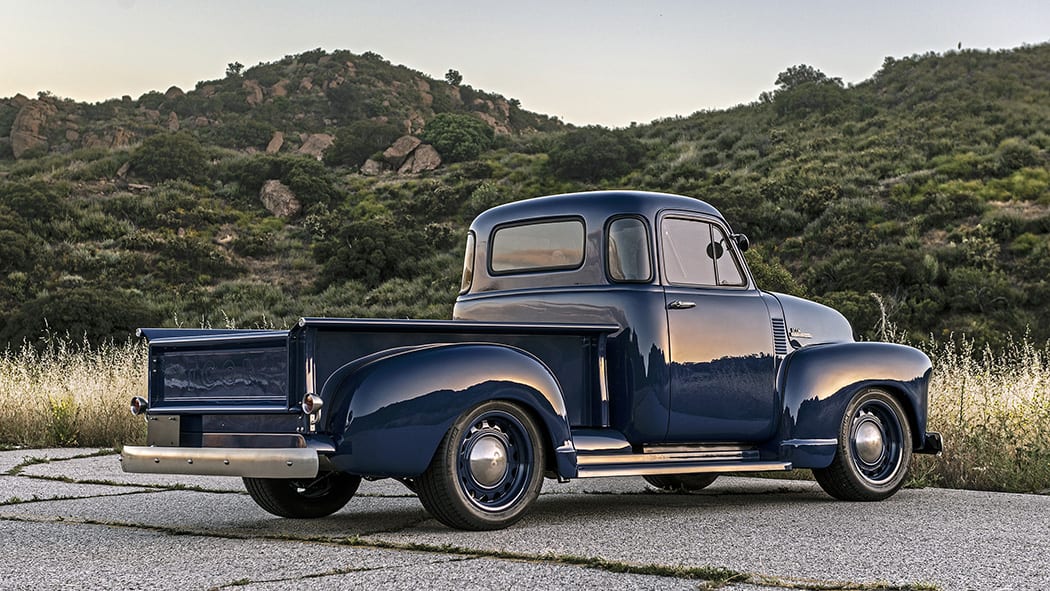 The power brakes are a combination of Wilwood master cylinder with calipers and big slotted and drilled rotors from Brembo. The pedal is firm and they’re easy to modulate. With a 16.8:1 ratio, the rack and pinion steering is quick, and it’s very responsive off center. There’s zero slop, and it’s also light enough so you can steer with one hand and hang your left elbow on the doorsill.

Back at the shop we give the truck another walk around and pick up a few other details we missed at first. Things like the turn signals in the side mirrors, the two kickpanel cupholders, which were taken from a Mercedes G-Wagen, and the functioning cowl vent. “I love cowl vents,” says Ward. “Opening it on the highway eliminates any wind buffeting when you have the windows down.”

Ward is going to start offering an Old School version of the Chevy Thriftmaster with more traditional trim and details. This look has proved to be a recent hit on his Broncos. He also wants to do a 4×4 solid-axle version that looks like the old NAPCO conversions from the 1950s. There’s already a rendering of that truck on his website. “I think it would be killer,” he says.

Hopefully there are a few more planks of black peat Oak still sitting in the muck of that Irish bog.