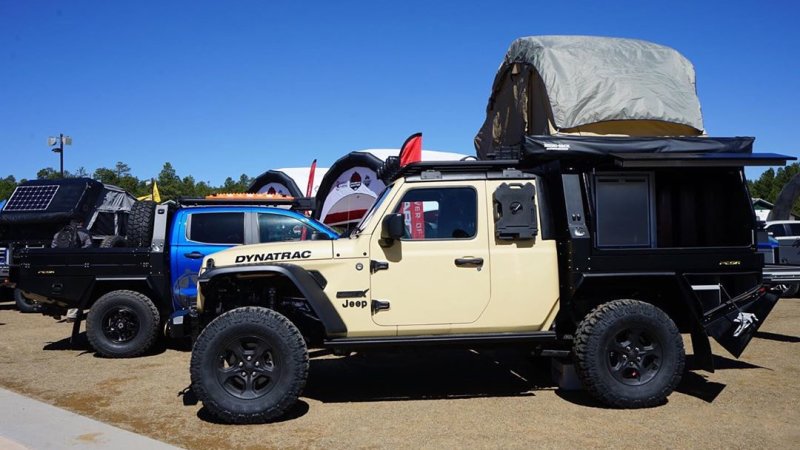 Last month, we wrote about Jeep’s acknowledgement that the 6.2-liter, supercharged “Hellcat” V8 engine fits in the Wrangler and Gladiator, albeit only just. Jeep’s brand chief Tim Kuniskis was eager to add that the fitment was so tight, that the engine-vehicle combination would be un-produceable by the company, citing crash safety reasons.

Naturally, aftermarket enterprises and Jeep enthusiasts would attempt to create this with crate engines, and one of the first instances of a Hell-iator has already appeared on this earth.

Built by axle and drivetrain specialist Dynatrac and Jeep Hemi conversion outfit America’s Most Wanted 4×4, this custom Gladiator CODEX goes further than just shoehorning the big, angry motor in a Gladiator and calling it a day. As well as performing the engine swap, AMW 4×4 shortened the truck by 20 inches, converting the cab into a two-door configuration, and before the 707-horsepower creation debuted at the Overland Expo West in Flagstaff, Arizona, it was fitted with a sturdy-looking bed cap with storage and a possibility to pitch a tent atop the cap. The heavy-duty bumpers were fabricated in-house, says Dynatrac, and the LED lighting rig completes the do-it-all, go-anywhere look.

There’s also a suitably safari style beige wrap job the truck gained after a shakedown long-haul roadtrip from Detroit to California. Dynatrac’s Instagram feed has plenty of shots from the build, and this walkaround video gives a good look into the external modifications.

We’re not sure if we like the overland build or the 707hp engine more, but it brings to mind the old adage attributed to the Swedish guitar hero Yngwie Malmsteen: “How can less be more? More is more.”