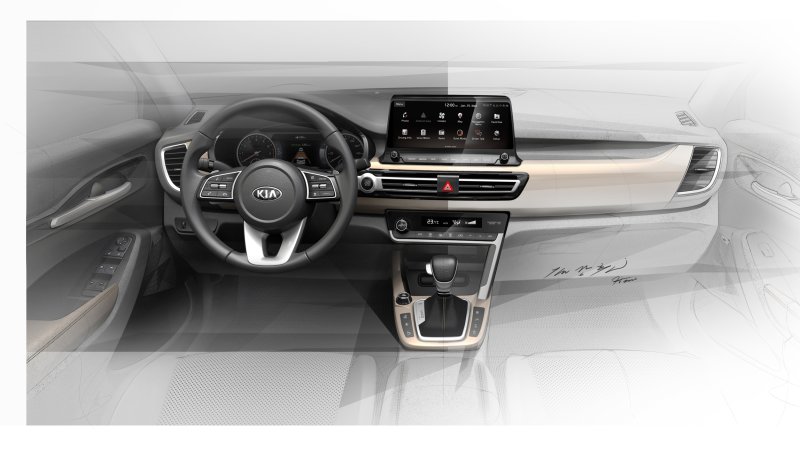 Little more than a week after releasing sketches of the exterior, Kia presents sketches of the interior of its first-ever small global SUV. Sticking to the message of enticements for younger buyers, we’re told this will be a “bold design statement” that is “trimmed in high-quality materials throughout” with the aim of creating a “modern ambiance to appeal to young-at-heart, tech-savvy buyers.” The renderings appear a good start to supporting those arguments.

The centerpiece is a 10.25-inch infotainment screen stood atop the instrument panel. A menu button on the top left, a row of navigation buttons along the bottom edge, and two rows of navigation icons on the screen should keep everything an occupant could want no more than a couple of touches away.

Beneath the screen come some chunky air vents, beneath those, an HVAC screen supported by an HVAC knob and controls. Notice how the IP design slides from the control surface into a passenger grab handle anchored on the center tunnel. To the left, a steering wheel loosely modeled on the one from the Sportage, ahead of an instrument binnacle that’s a quartet analogue gauges bracketing a digital display. The images show two different interior grades; for instance, one HVAC knob is printed with the word “Auto,” while the other isn’t, and the steering wheels in the two images are slightly different.

The differences are more pronounced around the shifter — which might, in fact, represent two kinds of shifters. AutoPortal reports there’ll be an automatic transmission as well as a seven-speed dual clutch gearbox. One gear lever is flanked by seven buttons, three of them for the heated steering and ventilated seats. Another button turns off the park assistance feature. Then there’s what looks like a hill descent control button, one for some sort of all-wheel drive feature like a locking rear differential, and a final button to turn off the Stop/Start system.

The other image looks like the more luxurious trim, even though it’s the one without the “Auto” HVAC knob. This gear lever is flanked by eight buttons, most too small to make out, but it’s clear that the AWD button is missing, and the ventilated seat icon is now a heated seat icon. There’s an electric parking brake switch next to the driver’s seat, two cupholders, and the forward surface of the lower cubby holds a 12V outlet and an AUX input.

We’ll find out what the real thing looks like soon. There’s rumor of a June debut at Auto Expo in India before the small crossover goes on sale in South Korea later this year. Auto Expo is where this vehicle’s inspiration, the SP Signature Concept, debuted last year. For a rough idea of size, Indian outlets say the new Kia will compete with the Nissan Kicks and Jeep Compass there.