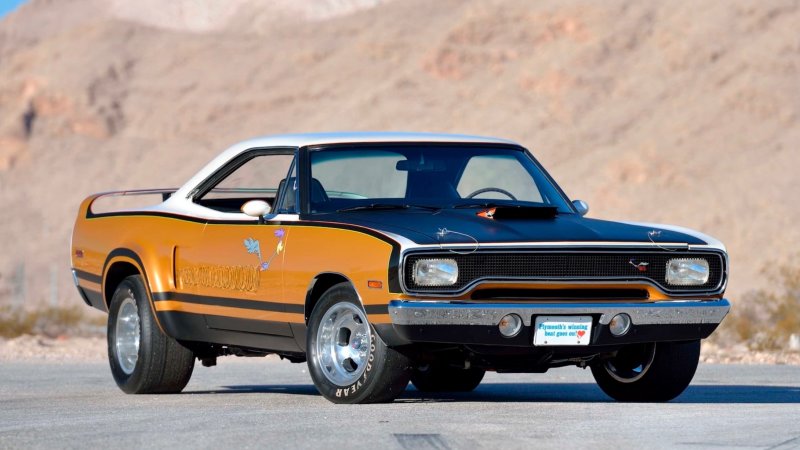 A little over a month ago, we told you about a group of factory-customized Plymouth muscle cars that were used on the Plymouth Rapid Transit show circuit. It was a promotional tour that demonstrated how you could potentially customize a then-new Plymouth. The cars were amazing period pieces that looked like classic Hot Wheels cars. The cars have now crossed the auction block, and all four we told you about brought in six-figure winning bids.

The most expensive of the four was a 1970 Plymouth Road Runner, shown above, that sold for $341,000. It featured a tri-tone paint scheme, custom rectangular headlights, full-width, single-piece taillight, a molded-in rear wing, slotted mag wheels and a big Road Runner decal down the side. Under the hood was a 426-cubic-inch Hemi V8 with an automatic transmission.


Following the 1970 Road Runner was a 1970 Plymouth Duster that went for $264,000. It had bold green paint, its second color scheme from Plymouth, with matching floral floor mats. The outside also had functional brake ducts, rectangular exhausts, and a bumper-less tail. It’s powered by a 340-cubic-inch V8 with a four-speed manual transmission.

Third most expensive was a redesigned 1971 Road Runner at $236,500. This one had a completely custom nose with no bumper and unique headlight covers, a bright orange paint job with white stripes, recessed hood scoops, Road Runner cartoon-shaped marker lights and red, yellow and green taillights. This Road Runner features a 383-cubic-inch V8 with an automatic transmission.

Bringing up the rear was a 1969 Dodge Dart Swinger with a sale price of $110,000. The lower price may be partly because it wasn’t technically a Rapid Transit car, but it was a factory custom from Dodge that was on the stand at the 1969 Chicago Auto Show. It features a mellow paint scheme, but unique touches such as the rectangular headlights, inset fog lights, integrated door handles and that enormous (and unfortunately fake) hood scoop. We wouldn’t remove that scoop, though, since Dodge put it there itself. Like the Duster, it had a 340-cubic-inch V8 and four-speed manual transmission.

If you’d like more details on each of these cars, be sure to check out our original post.